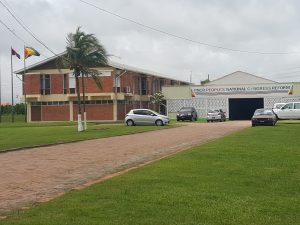 Congress Place, the headquarters of the People’s National Congress Reform.

Altogether, at least four of them are known supporters of Joseph Harmon who lost in his bid to become Chairman of the PNCR, based on unofficial results seen by Demerara Waves Online News.

Corlette is a former Region Four (Demerara-Mahaica) Chairman, Sampson is a former head of the National Congress of Women (formerly Women’s Revolutionary Socialist Movement), Allen is currently Chairperson of Region Four, Mingo is Chairman of the Local Government Commission and former Region 10 Chairman, Ally is already the PNCR’s General Secretary, Vanwest Charles is the General Manager of the Guyana Water Inc and son-in-law of late PNCR Founder-Leader, President Forbes Burnham and Norton is a former PNCR General Secretary.

Of the more than 80 nominees for the Central Executive, former Chairman of the PNCR’s Youth and Students Movement, Christopher Jones topped the elected representatives with 382 votes followed by Norton with 328.

Also elected to the Central Executive are Dr. Karen Cummings, Thandi Mc Allister and Winston Felix who is the Minister of Citizenship and Immigration.

Vanwest Charles had endorsed the Alliance For Change in the weeks running up to the May, 2015 general elections, but from all accounts he has returned to the PNCR.  Vanwest Charles, London, Mc Allister and Norton all campaigned heavily for Minister of State, Joseph Harmon to be elected Chairman of the party. It is believed in some party circles that Ally was also in Harmon’s corner.

Up to recently, Norton was a presidential adviser on youth empowerment, but he has since been appointed Director of Migration at the Ministry of the Presidency’s Department of Citizenship and Immigration. Best is a former presidential advisor on the environment and up to recently he was vocal of reparations for the descendants of enslaved Africans.

The PNCR is yet to officially announce the results for the Central Committee, four days after more than 800 delegates cast ballots at that party’s 20th Biennial Delegates Congress.