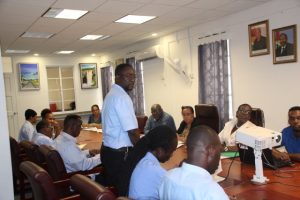 FLASH BACK: GTU President, Mark Lyte (standing) during the breakdown of salary talks with a Ministry of Education team led by Minister Nicolette Henry seated opposite Mr. Lyte.

Negotiations for higher salaries and other benefits for government-employed teachers are back in the hands of the Ministry of Education, even as the Guyana Teachers’ Union (GTU) signaled that it was willing to accept less than the 40 percent being demanded.

GTU General Secretary, Coretta Mc Donald confirmed that a meeting is slated to be held with Minister of Education, Nicolette Henry on Thursday at a time to fixed.

“We don’t want to go there and waste time because we have a proposal on the table,” Mc Donald told Demerara Waves Online News. She said the union would consider reducing its demand for increased salaries. “We have always been open with regards to the forty percent. The GTU is always willing and ready to negotiate with whoever forms the government,” she added.

In November 2017, President David Granger’s establishment of a task force to examine the union’s proposals and recommendations by a Commission of Inquiry had averted a strike.

Finance Ministry sources have expressed grave concern about the 40 percent pay increase on the 2015 salary that has found itself in a Task Force Report, saying that it would be too expense for the government to fund because other public sector employees including the security forces would expect similar wage and salary increases and fringe benefits.

Now that Finance Minister, Winston Jordan has compiled a new report from the Task Force report and has submitted it to Cabinet, Minister of State , Joseph Harmon told reporters that government would on Thursday inform the teachers of its position. “Government, at the level of Cabinet, has prepared a response to those recommendations and it is the government’s response which will be given to the union by the Minister and then there will be further discussions. It’s basically an answer to the recommendations made by the High Level Committee,” Harmon said.

Latest estimates show that the Task Force’s salary hike and other benefits could cost the Treasury GY$4 billion annually for teachers alone or GY$10 billion for all government employees.