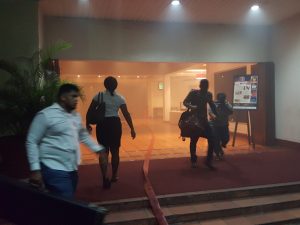 In the wake of Sunday night’s fire at the Guyana Pegasus Hotel, guests have raised concerns that no alarm was sounded to alert guests and patrons to evacuate the building.

Chief Fire Prevention Officer of the Guyana Fire Service, Andrew Holder confirmed claims by several guests that the fire exits were locked at the time of the fire. Holder said even the exit at the eastern kitchen where the fire occurred was locked.

“I have observed that even in the kitchen area when we were trying to ventilate,” he said, adding that an impromptu fire safety inspection of the hotel would be conducted. “It should not be locked. If it is locked, there should be an easy way of opening those exits and some of them are chained and padlocked,” he said.

The fire was contained to the kitchen, but several areas of the hotel were filled with smoke. No major structural damage was seen.

Lamenting that the discovery of the shortcomings at the hotel were discovered two days after last week Friday’s poorly attended fire prevention awareness exercise for hotels, Holder said after Sunday’s fire the hotel would have to be inspected again. 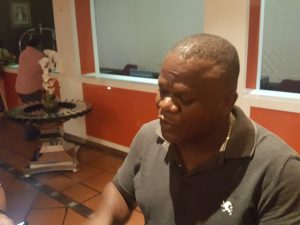 Numerous guests, who evacuated the hotel, complained bitterly that no fire alarm was sounded to alert them that there was an emergency and they should exit. An American guest, who is visiting Guyana for the first time, said he was asleep and only realised there was a fire when someone banged his door and shouted fire. “I heard someone shouting ‘fire, fire’ and banging on the door. There was no alarm, nothing,” said the guest who is staying on the third floor. I grabbed my bag. In the hallway, there was smoke and there was smoke on the second floor. You smelled the cooking oil,”  he told Demerara Waves Online News.

Pastor Elsworth Chester, who was the man banging on doors of other guests to alert them, said there was a “big chain” on one of the exits. “I thought Pegasus was comfortable, one of the five star hotels. Pegasus has been tragedy, unacceptable. I was on the second floor trying to get out. When I ran down there was a big padlock on the door on the exit, then when I tried to go to the top, the third floor, there was a padlock and a chain and there was no other exit and I had to come through the smoke. It’s because of Jesus we are alive,” said Chester who is based in the United States. He recommended that government takes action against the hotel because safety is very important to tourists. 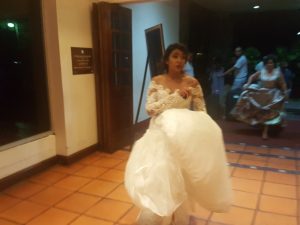 A bride whose reception at the Pegasus Hotel was disrupted by the fire.

Managing Director of the Pegasus Hotel, Robert Badal was not seen on the premises and one of the staff members declined to speak to the media. “You are the media? I can’t talk to you right now,” he said.

Persons were seen exiting as white smoke filled the lobby. A number of them panted and coughed as they hurriedly left the premises. Staff and relatives of persons were heard shouting the numbers of rooms that were still occupied.

Several fire tenders, an ambulance  and police responded promptly. There were no immediate reports of injuries.

A telecommunications expert, who is here for an engagement with one of the major voice and data providers in Guyana, said he was under the shower and saw some smoke which he thought was as a result of the hot water. While watching television, he said he received a telephone call telling him that there was a fire and he must collect his belongings and leave the hotel. 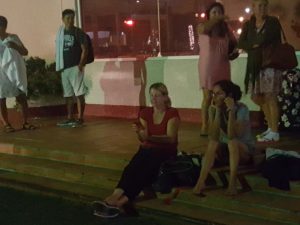 A number of guests outside the hotel as fire fighters worked inside.

Another guest said she and her nephew, who has a breathing problem and is expected to go to hospital on Monday for surgery, also complained about the poor emergency response. “I smelled the smoke. No one knocked at the door, no one called, no alarm. I took him and ran out,” she said.

Several fire tenders, an ambulance and police responded promptly to the fire call. There were no reported injuries.

Pegasus Hotel, once foreign-owned, was built in 1969 by the British construction firm, Taylor Woodrow, and since then has been expanded to include the western wing.

The owner plans to invest US$150 million in constructing a brand new state-of-the-art eastern wing including accommodation and a modern conference centre, in time for Guyana’s commencement of oil production.