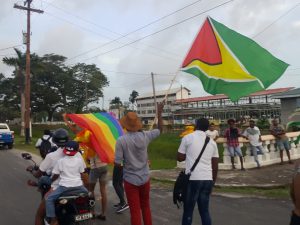 At least 100 of Guyana’s Christian Evangelical and Pentecostal church leaders on Sunday collectively called on government not to outlaw buggery, but the country’s major lesbian and gay rights organisation is not worried that government will buckle to pressure at the risk of losing votes in a general election.

Head of SASOD, Joel Simpson said the removal of colonial-era buggery laws that Guyana inherited in 1966 when independence was granted by Britain and other human rights issues would not determine political support.

“I also don’t think that when persons go to vote when we get around to elections and so on, people will base their vote predominantly on whether a particular party supports human rights for any minority group; whether it is LGBT (Lesbian, Gays, Bisexuals or Transgender). People are looking for much more bread and butter issues when they decide which party they are going to support,” said Simpson. He believed that priority issues for Guyanese voters include reducing corruption, managing Guyana’s oil resources to ensure the benefits for trickle down to ordinary Guyanese, poverty alleviation and sustainable development.

In a newspaper advertisement, they registered their strong objection to any attempt by government to give into the demands by the gay and lesbian community to remove the law against buggery. “Moreover, we believe buggery and other practices characteristic of the LGBTQ community, lifestyle are in fact, detrimental to persons engaging in them, and the decriminalisation of such acts, will have the effect of escalating the practice of these harmful and destructive behaviours, and endangering the morals of our youth and society as a whole”, the church leaders said.

The Roman Catholic and Anglican Bishops were not among the signatories. The United States, Canada, Britain, European Union and the Guyana Trades Union Congress have all repeatedly called for the removal of laws against buggery and cross-dressing, the latter of which is up for decision by the Caribbean Court of Justice.

In June 2018, a section of the Christian community had failed to convince government to stop a gay Pride Parade through the streets of Georgetown.

Simpson  said although the coalition had promised in the 2015 election campaign to decriminalise same-sex intimacy, now the government has taken the stance that it has not yet discussed the issue. A similar posture has been taken as regards the softening of penalties for the possession of small amounts of marijuana for personal use.

Asked whether he was not concerned that government might heed the call by the Christian community for fear that with APNU+AFC’s already slim majority- just about 4,000 vote margin- in the 2015 elections, that to do otherwise could result in electoral defeat in 2020, the SASOD founding member questioned “what’s the option, what’s the alternative”. “Politically, this effort is of no moment, is of no significance. It’s a storm-in-a-teacup issue”.

The SASOD official said his organisation did not plan to formally respond to the Christian church leaders because the scrapping of Guyana’s buggery laws was not a priority for his organisation. Instead, he said SASOD was driving a legislative and awareness agenda to ensure minority groups are not discriminated against in violation of the Prevention of Discrimination Act and Guyana’s Constitution because of their sexual orientation, gender identity and gender expression. The parliamentary Social Services and Economic Services committees, he said, would be engaged as part of a sensitization process, although government has committed to ensuring access to education, health and other services.

Laws against buggery and cross-dressing, he said, were enshrined without the involvement of Guyanese, but were imposed on the country when it was a colony. In that regard he noted that Britain has since repealed those laws because they violate human rights. The law penalises buggery with life imprisonment or 10 years imprisonment for attempted buggery or assault with intent to commit buggery.