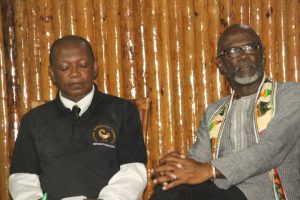 The Guyana Reparations Committee is drafting legislation to allow Afro-Guyanese to secure a percentage of Guyana’s territory as compensation for slavery in the same way that Amerindians have been legally guaranteed land rights, a move Retired Rear Admiral Gary Best supports.

“I believe that unless the State acknowledges its responsibility, we’ll only be looking towards the external reparations which is financial reparations but within the country itself, I think Guyana owes its own people to allocate a portion of land both onshore and offshore reparatory justice to the people of Guyana,” Best said.

The issue was discussed at the University of Guyana’s 6th Conversation on Law and Society that was held on Monday  under the theme “The Challenges of and to Reparations for People of African Decent in the 21st Century.”

Best, an Attorney-at-Law, is drafting legislation for the Committee which is part of a Caribbean Community (Caricom) Reparations Commission that continues to lobby Britain to compensate countries in the region for slavery.

The former Guyana Defence Force (GDF) Chief-of-Staff argued that the State of Guyana has a duty to grant some form of reparation to descendants of African slaves by setting aside 18 percent or 15,000 square miles of Guyana’s territory.

“As a successor State, we owe a responsibility to correct those historical wrongs so I believe the Government of Guyana, more particularly the State of Guyana, owe the people of Guyana land as compensation for reparatory justice,” Best said, adding that his recommendation was linked to recommendations by the 1948 Commission of Inquiry into the social conditions of then British Guiana by British Professor Dr. J. A. Venn. 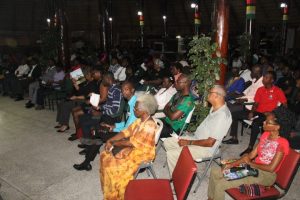 A section of the attendees at the University of Guyana’s 6th Conversation on Law and Society that was held on Monday  under the theme “The Challenges of and to Reparations for People of African Decent in the 21st Century.”

He argued that the State of Guyana has a duty to provide partial reparations as partial restorative justice based on three specific occasions: Africans were kidnapped and illegally transported to this part of the world from their lands, they indigenised the lands for more than 200 years but they were not handed to them, and only Amerindians received reparatory  justice at the time of Guyana’s independence in 1966 through the provision of lands to Amerindians, and when Guyana became a republic in 1970 no lands were again provided to African descendants.

“I do believe that the State owes a responsibility to the people of this country because it was always the State that committed the crime and prior to the Guyana State it was the British State and it was the British State that committed those heinous crimes,” he said. Best bolstered his argument by saying that enslaved Africans had humanised the coastline, created the nation state, developed the modern state and provided safe haven for all other ethnic groups to come to Guyana.  He said unless the State acknowledges its responsibility, Guyana would be merely seeking financial compensation from Britain.

Best told Demerara Waves Online News  on Wednesday that he expects the draft to be completed by year-end after which it would be presented to government and eventually the National Assembly for bipartisan consideration. “It is aimed at reducing inequalities and part of the healing process,” he said.

He restated that the committee would lay its claim before the President of Guyana, Cabinet and Parliament. He said Guyana’s Amerindian Act is the first reparatory justice Act in the Caribbean because it provides the nine Amerindian tribes 13.8 percent of  Guyana’s territory. “That’s what it is regardless of what you call it or don’t want to call it and the reason why Africans in Guyana have a claim to reparatory justice in Guyana is because three of those nine tribes came to Guyana a hundred to two hundred years after captive Africans were brought here so if they were given reparations, why shouldn’t we,” he said.

At the same time, Phillips said among the hurdles to reparations are questions about the legality of demands, disunity, calls for forgiveness by the church and the media,  huge unrealistic financial demands and views by other ethnic groups that Africans do not deserve reparations although 473,000 lives were lost in building Guyana.

The Caribbean’s demand of 7.5 trillion pounds sterling, he said, was not too large to be paid because Britain and other European countries could pay the region 1 percent of their Gross Domestic Product  each year for 400 years. “It will never be too large to pay”, he said.

Phillips said there was need for public education and awareness to hammer home the point that reparatory justice is necessary and just. Saying that an expression of regret by European countries was insufficient.