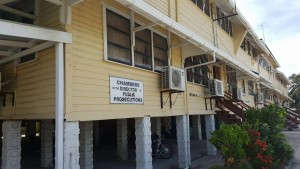 The Chambers of the Director of Public Prosecutions

The son of Guyana’s Junior Minister of Natural Resources and his female partner are to be charged with assault.

Hector Broomes is to be charged with one count of assault causing actual bodily harm. He is the son of Minister Simona Broomes.

His partner, Gilbeth Rodriguez, is to be charged with two counts, one for asault and the other for throwing missiles.

The incident reportedly occurred in Bartica several days ago.

The Guyana Police Force reiterated that its Interior Divisional Commander, Superintendent Kevin Adonis has “vehemently denied” that he came under ministerial pressure to release Broomes.

Police said Broomes and Rodriguez would be charged under the Summary Jurisdiction (Offences) Act Chapter 8:02 based on legal advice following “a thorough investigation into the alleged incident” .

Police said they would appear in court soonest.