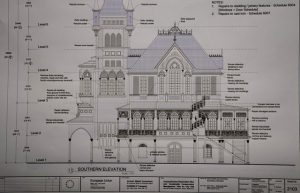 City Hall along with the Engineer’s and Mayor’s buildings are to be restored to their former 19th-century glory to the tune of $903Million.

This was highlighted in a $64 million Comprehensive Restoration and Sustainable Conservation Management Plan for City Hall which was handed over to Minister of Social Cohesion with responsibility for Culture, Dr. George Norton, on Monday at the Pegasus Hotel. The project is a collaborative effort between the European Union (EU) and the National Trust of Guyana.

Minister Norton urged that City Hall’s restoration is used as an example for the preservation of Guyana’s Heritage: “Every piece of infrastructure and every site forms part of our identity and who we are. This dear land cannot afford to lose its identity. The onus is on us as the people of Guyana to preserve and cherish all that it has to offer,” Norton was quoted as saying by government’s Department of Public Information.

The minister noted the rich history of City Hall which was designed by architect Reverend Ignatius Scoles in 1887 and completed in June 1889. He alluded to the demolition of St. Roses High School and warned that “we salvage whatever we can from that structure and hope that the same doesn’t happen to other structures.” 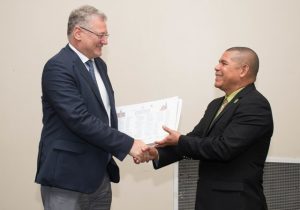 Head of the European Union Delegation, Ambassador Jernej Videtic presenting a copy of the plan to Minister of Social Cohesion with responsibility for Culture, Youth and Sport, Dr. George Norton

The assessment was conducted by overseas-based specialist conservation architects, Francis Maude and Ed Morton. Key findings indicated that the building can be restored in single or multiple phases, and that income can be generated for commercial purposes such as a gallery or museum. Its use, as the seat of the City Council, should be retained and a maintenance and repair programme must be implemented and adhered.

Town Clerk Royston King was confident the plan would be implemented. “We are very sure that the plan won’t shelve like many of the plans in the past and we all just walk away. I’m sure that our international friends and the government will continue to work with us as we move to the next step.”

King also expressed gratitude for the government’s assistance since its assumption to office in 2015. This has resulted in the council embarking on projects including minor work on the engineer’s and constabulary buildings and the renovation of the Kitty Market. 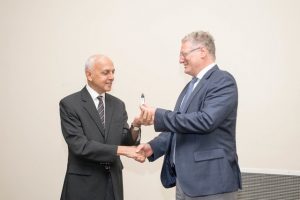 Minister of Communities, Ronald Bulkan receiving a digital copy of the plan to restore City Hall.

Ambassador of the European Union Delegation, Jernej Videtic noted the importance of preserving cultural heritage: “Through cherishing our cultural heritage we can discover our diversity and start an intercultural conservation about what we have in common. As it is applicable to the EU so it is for Guyana.”

Digital copies of the plan were presented to the Minister of Communities, Ronald Bulkan and Royston King.

The wooden building is literally falling to pieces, with every passing day.