ExxonMobil yet to decide on constructing gas pipeline 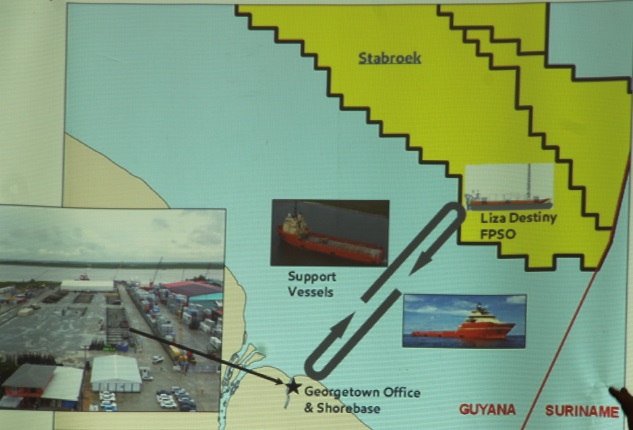 ExxonMobil is yet to decide on whether it would construct and manage a gas pipeline to bring natural gas ashore for Guyana Power and Light to generate electricity at a lower cost, even as the company reiterated that it is better to re-inject all of the gas to extract more oil.

Country Manager for ExxonMobil, Rod Henson said there were no agreements or decision so far and talks were ongoing with government but internal studies have been conducted that show it is technically and financially feasible.

Asked by the Chairman of the bipartisan parliamentary committee on natural resources, Odinga Lumumba whether ExxonMobil would construct and manage the pipeline, he said the company was yet to decide on that. “That’s one of the things that we are considering internally. We haven’t reached an internal decision yet,” he said.

If environmental and other approvals are granted in a timely manner, he said construction could be completed by 2022 or 2023

Henson said the development plan for Liza Phase One, which is expected to pump first oil in March 2020, provides for all of the gas to be used in oil production. “Ultimately you get the most value from your resource by doing that so Guyana will get more value by re-injecting that gas because it helps reservoir pressure… and ultimately it helps to recover more oil,” he said, adding that a gas pipeline was never part of its original plans. “We don’t have an intention to do this. This is something that we are discussing. It’s an opportunity that we want to work with Guyana to see if we can make something work here,” he said.

However, given Guyana’s high electricity bills Henson said they have examined whether “we could divert some of that gas to shore and that’s the project that is under discussion right now”. The discussions with government, he added, have been focusing on the location of the gas and capital costs.

He told the committee that the plan entails building a pipeline from the Floating, Production, Storage and Offloading (FPSO) vessel, Liza Destiny, to transfer 30 to 35 cubic metres of gas to  Guyana’s shore.

The Guyana government has said the gas pipeline would land in the vicinity of Mahaicony, East Coast Demerara.