Haitians, Cubans not being registered to vote in Guyana; most left through porous borders- Felix 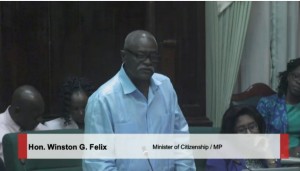 Minister of Citizenship, Winston Felix. He is also a former Commissioner of Police.

Minister of Citizenship and Immigration, Winston Felix on Monday slammed claims by the opposition People’s Progressive Party (PPP) that more than 20,000 Cubans and Haitians are in Guyana and are being granted citizenship to vote in the 2020 general elections.

“You just don’t take people off the road and make them citizens, particularly if they are speaking a foreign language, because when they turn up to vote they ain’t understand what is happening so we wouldn’t do that. How can you start to do that? You would be detected from minute one because the persons are speaking a foreign language and they are coming to vote in an English country,” he said when asked by Demerara Waves Online News for a reaction.

Felix, instead, said most of the foreigners for whom there  are no departure records could left illegally through the porous borders to Suriname in the east and Brazil in the south. “Most of those people are not here. I can assure you but I gave the figures as they are. They are not manufactured. They are taking it to convince you that it’s for 2020 elections. How you are going to do something like that and people (are) speaking French and Spanish,” he said.

General Secretary of the opposition People’s Progressive Party (PPP), Bharrat Jagdeo told party faithful at a public meeting at Enmore, East Coast Demerara that his party was guarding against the padding of the voters’ list with foreigners. “We are looking at every single possible way they can rig the election…from padding the voters’ list, to the GRO (General Registrar’s Office). You have heard us raise a lot of issues about trafficking in persons; bringing Haitians and Cubans, collecting large sums of money from them and trafficking them in through the country but we want to know if they are using fake documents issued there for the registration of those individuals,” he said.

Felix suggested that those foreign nationals have been slipping through the back-track routes across the Corentyne River to Suriname and across the Takatu River which is passable on foot during the dry season. “We have not been pushing our luck on the water because we would have no case. From 66 Village going to Moleson Creek it’s a different ball game so that has been the difficulty which faced us in closing down the east and the south is a long, wide un-policed border,” said Felix, a former Police Commissioner and Chief Immigration Officer.

He has been summoned by the bipartisan committee on foreign relations to explain the large number of persons presumably still in Guyana, but Felix said he has not yet given a date.

Declaring that the registration of Haitians and Cubans to vote here “cannot happen, plain and simple” the Immigration and Citizenship Minister said the Haitians and Cubans would first have to be citizens and satisfy certain residency requirements before they could be allowed to vote in Guyana.

As far as Haitians are concerned, there appeared to be a steep rise in the number of Haitians arriving but there are no immigration forms to show that they departed. During 2017 and 2018- 3,515 arrived and 291 left in 2017 and between January and April,  only 85 of the 1,238 officially departed, bringing to a total of 4,377 for all of last year and 2018 so far. From 2013 to April 2018, the total number of Haitians for whom there are no Guyana immigration departure records stands at 5,485.