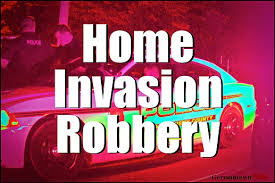 Armed bandits early Tuesday morning invaded a couple’s home and tied up a pensioner before they loaded his car with several items, all valued GY$3,540,000, and fled the scene, police sources said.

The incident occurred at about 1:45 AM at the Kuru-Kuru, Soesdyke-Linden Highway residence of 61-year Frederick Mc David and his 57-year old wife, Denise Mc David.

Investigators were told that three men, who were armed with a shotgun, cutlass and knife, entered the couple’s one-flat residence, entered Mr. Mc David’s bedroom and tied him up while they ransacked the premises for about 30 minutes. Apart from the fact that he was tied up, no one was injured and no shots were fired.

He told police that they demanded cash and jewellery and then tied his mouthy, feet and handsd and placed him to lie on the bedroom floor.  Mr. Mc David said the robbers uplifted his car keys and drove away with the stolen items.

His wife was asleep during the ordeal.

Prior to the incident, the Mc Davids retired to bed at about 9 PM.