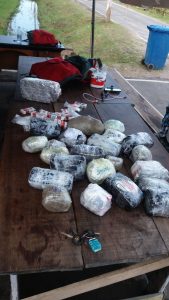 A man, who attempted to hurl 1.7 kilogrammes of marijuana, cigarettes, cell phones and other items over the Lusignan Prison fence escaped being shot or arrested.

The Guyana Police Force said at about 1 AM Monday, police and prison guards at the East Coast Demerara penitentiary responded to sounds and spotted the man. He eluded the lawmen.

They were manning the eastern towers of the Lusignan Prison, when they heard “crashing sounds” emanating from the bushes and shortly after observed a male wearing a hoodie emerging.

“A “warning shot” was fired and he fled back into the thick vegetation. The area was immediately combed; the male was not seen but three bags containing the following items were found and lodged,” police said in a statement.
1.One hundred and forty-one packets of cigarettes.
2. Four cellular phones.
3. Eleven lighters
4. One power pack.
5.One ear piece.
6. One phone charger.
7. Fifteen packets of small-sized zip lock bags and
8. One thousand seven hundred and ninety-four (1,794) grams of cannabis.