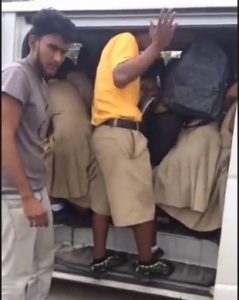 A Route 42 minibus driver and conductor have been charged with several traffic offences after police used a Facebook video post  as a tip-off to go after the vehicle operators.

“The article on Facebook indicated that 45 school children were in the minibus. However, both driver and conductor told Police that there were 24 children in the bus; but looking at the video, it seemed clear that the children were packed like sardines,” the police force said in a statement.

Labelling the video of the bus, BWW 7259, overloaded with school-children as “disturbing”, the Guyana Police Force  said “swift action” has resulted in the driver and conductor being arrested and charged with overcrowded front seat, breach of insurance, untidy driver, overloaded minibus, untidy conductor and unlicensed conductor.