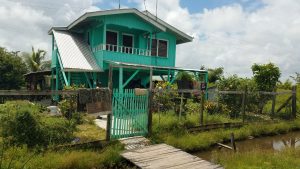 The house at Glasgow, East Bank Berbice where a man stabbed to death his wife and daughter

A man, who stabbed his wife and daughter to death at their East Berbice home, was later found hanging from a rope at an abandoned house, villagers and police sources said.

The body of the man, whose only name given was ‘Rado’, was found hanging below a house located a short distance away from his residence at Glasgow, East Bank Berbice.

Earlier Wednesday, he slit his wife’s throat and then stabbed his 21-year old daughter several times.  His wife, Camille’s, lifeless and bloody body was found in a hammock under their house. Their daughter was rushed to the New Amsterdam Hospital where she died.

The ordeal was witnessed by the couple’s two-year old son.

Neighbours also responded to loud screams coming from the house.