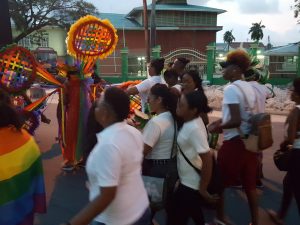 The Guyana Gay Pride Parade passes by the Ministry of the Presidency on its way to the Square of the Revolution.

Guyana held its first gay pride parade, with the country’s gay rights activists accusing the three-year old government as well as the opposition of breaking their election campaign promises to outlaw discrimination against vulnerable groups.

“We are saying enough of the rhetoric, enough of the promises. It is time to make good on the legislative changes that we heard about from both parties in the 2015 elections and we want to see action and we want action now,” Joel Simpson told reporters. He acknowledged that the gay and lesbian community in Guyana is small but “our rights need to be respected like everybody else’s rights so this is a very, very visible way of demanding our rights.”

Several curious onlookers turned out at the starting point and along the route to get a glimpse at the parade by people of all walks of life, races, and ages. There were no major incidents such as such as sustained verbal exchanges between participants and onlookers.

As the parade passed the Seventh Day Adventist Church located at Church and Oronoque Streets, Queenstown, at least two homosexuals skimpily clad in female attire gyrated and bent backwards towards the church. A number of adults and children, presumably parishioners, who were at the church door and entrance stood expressionless.

Moments before the gay pride parade, which included a number of male cross-dressers and lesbians, moved off opposition People’s Progressive Party (PPP) parliamentarian, Priya Manickchand called on President David Granger to hold meaningful talks with interest groups to deal with concerns among the Lesbian, Gay, Bisexual and Transgender (LGBT) community. “I would say we have to sit down at serious conversations, countrywide conversations where the environment is open and honest to examine the issue as a whole,” she said. She added that LGBT persons contribute to the Guyanese society, and at the same time the concerns by the rest of the country should be addressed as part of an bottom-up education approach. 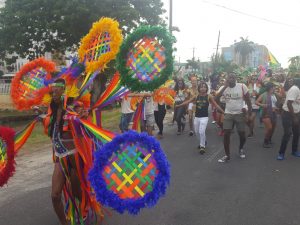 Personally, Manickchand said she would like colonial-era laws against buggery and cross-dressing to be scrapped. “It is safe to say that Priya Manickchand supports the decriminalisation of personal sexual relations.  Now I want to be very clear- any rape by any person is a crime.

I am talking about people  should  be able to make their own choices in their own bedrooms and I don’y believe the government has a place in people’s bedrooms,” she said.

Manickchand, who is a practicing Attorney-at-Law, made it clear that any LGBT person who commits a sexual offence must be dealt with seriously according to the law.

Simpson praised the police that accompanied the march from Middle Street south onto Carmichael Street, east along Church Street, south along Vlissengen Road and to ‘Cuffy’ Square of the Revolution. “We want to big-up the Guyana Police Force. We are often very critical of the police but tonight we have to big them up because they served and protected us,” he said. 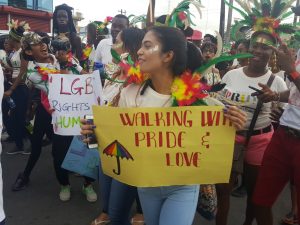 A number of the paraders waved placards stating messages such as “Walking With Pride and Love” , “LGBT rights are human rights” and “Be who you are, not who the world wants you to be”.

In his closing remarks at the end of the parade, Simpson took the opportunity to react to several Christian pastors in Georgetown who had objected to the parade and had called on government to stop it on grounds of illegality. “Under the Constitution of Guyana, every citizen is entitled to fundamental rights and freedoms. Aren’t we all Guyanese here? Aren’t we all entitled to fundamental rights and freedoms- freedom of assembly, freedom of association, freedom of expression, equal protection of the law and every right under the constitution. I don’t know what they are talking about,” he said.

The parade was organised by the Guyana LGBT coalition which includes SASOD, Guyana Trans United and the Guyana Rainbow Foundation.