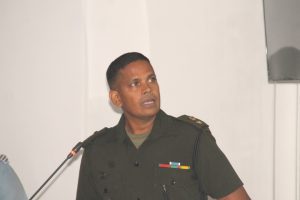 Testimony by man-who was 15 years old at the time of the Lindo Creek massacre- could be tested on the witness stand of the Commission of Inquiry on Wednesday, and it is unclear whether he would appear in person because of concerns for his security.

Attorney-at-Law for the Guyana Defence Force (GDF), Leslie Sobers remarked shortly before the adjournment of the inquiry on Monday that Dwayne Williams would have crucial information to allow the inquiry to arrive at the truth.

“We believe that he would be very instrumental to this Commission,” Sobers, also a senior officer of the Guyana People’s Militia, the reservist organisation provided for in Guyana’s Defence Act, told the one-man Commission of Inquiry being presided over by Retired Justice Donald Trotman.

He referred to Williams as the “lad” who was found on the UNAMCO trail and had given “certain information to the Joint Services” that had led to the discovery of a firearm and ammunition.

Earlier at Monday’s hearing, Colonel Omar Khan of the now GDF Military Criminal Investigations Department, said the Joint Services had come into contact with Williams who had been detained and questioned. He then had led the security forces to a place where an AKM rifle (an upgrade of the AK assault rifle) had been recovered at Goat Farm in June 2008. Khan said it was that rifle that had been issued to Guyana Police Force Corporal Ivan Williams at the time he had been shot dead in Buxton, East Coast Demerara

Justice Trotman remarked that it would depend on whether Dwayne Henry protecting himself by not wanting to appear before the Commission of Inquiry.

Clearly protesting what appeared to be partial disclosure of information, GDF Attorney-at-Law, Roysdale Forde said it was the first time that his legal team was hearing that Williams was in protective custody and he also “humbly pray and beg” that the police statement would be provided.

Commission Chairman, Justice Trotman at that juncture pointed out that the witnesses are the commission’s but “that does not affect fairness.”

Meanwhile, the Commission of Inquiry will later this week hold interviews and public interactions with residents in Linden, Ituni, Kwakwani, Christmas Falls and Lindo Creek.

Colonel Khan said the Joint Services Operations Group had received credible information that Rondell “Fineman” Rawlins had been in the Linden area. He said the GDF had begun to pay closer attention to Fineman and his group shortly after it had been discovered that several AKM rifles and ammunition had been stolen from the GDF’s armoury and the spent shells at a number of  crime scenes had matched the 7.62 X 39 MM bullets that are used by the AKM rifles, which is an upgraded version of the AK-47 rifle.  Among the places that the spent shells had been found, he said, was at the residence of Agriculture Minister Satyadeow “Sash” Sawh where he and a number of his siblings had been gunned down in April 2006. Also, there was the fatal attack at the Kaieteur News printery at Industrial Site, Eccles and the Rose Hall bank robbery.

Khan noted that among the items found after a shootout at Goat Farm, Upper Berbice River were credit cards belonging to Sawh. The army officer said eight of the nine AKM rifles that had been later recovered belonged to the GDF.

After Rawlins became a “security interest” in May 2007, Khan said “we embarked on aggressive information gathering” and had verified information that the gang had been armed with AK 47 assault rifles.

Khan said the police on June 6, 2008 had been involved in an operation at Christmas Falls and it was not until after that date that Joint Services Operations Group had been deployed. He said information gathered at that time had revealed that the ‘Fineman Gang’ had been in that area as well as Linden.