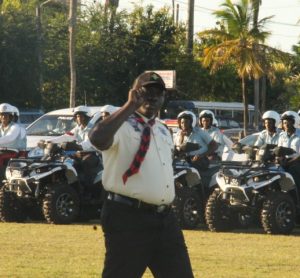 The car, in which senior official of the Guyana Police Force Scouts, Corporal Theon Hope and another man were killed, was speeding when it Tuesday morning slammed into a lumber-laden trailer, investigators said.

“Enquiries disclosed that motor vehicle PNN 1278 was proceeding north with four occupants, allegedly at a fast rate and collided with the rear of motor lorry GWW 8443, trailer TWW 8912 laden with lumber, which was travelling in the same direction and one of the lumber protruded the motor car,” police said.

The accident occurred on the Linden-Soesdyke Highway in the vicinity of Loo Creek at about 7:30 AM

The driver Rishawn Pierre 23 years, of Durban Street, Lodge is in custody assisting with this investigation. The other occupant of the motor car is receiving medical attention at Linden Hospital Complex.

A police source said there is a scout event in Linden on Tuesday, but he could not immediately confirm that Hope was going to that event or was heading to that town for personal reasons.