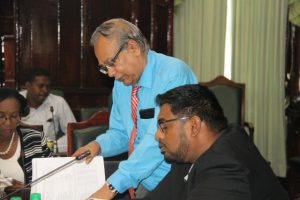 Government and Regional Accounting Officers such as Permanent Secretaries and Regional Executive Officers (REOs) will soon be administered an Oath, before giving evidence at the Parliamentary Public Accounts Committee (PAC), given the growing levels of inconsistent answers being provided to the statutory body.

The commitment was had on Monday during the session convened by Committee Chairman, Irfaan Ali, who was at time interrogating Region 10 REO, Orin Gordon over the 2016 Auditor General’s findings in relations to expenditure for that Region.

Ali in an interview with Demerara Waves during a break in the session indicated, “…the Standing Order provides for officers or anyone coming before the PAC to do so under oath.”

The Committee Chairman explained when a Public Officer gives the evidence to the PAC under oath, “it would reinforce the legal obligation to be wholesome, full, thorough and honest in their response to the PAC as there can be implications for them personally.”

According to the PAC Chairman, “…the Standing Orders provide for them to given evidence under oath, so the basis is there.”

He told Demerara Waves, in future once an oath is broken, then the Guyana Police Force will be called in by the PAC.

It was explained that there is growing concern in among sections of the public over the fact that Accounting Officers are consistently breaching the established rules “and what are we doing?”

As such, he told Demerara Waves, “we are now moving into this direction to have them sworn as they give evidence.”

The PAC was convened to firstly consider concerns raised by the Auditor General in his 2016 scrutiny the Region’s Expenditure. Questions were raised over contracted employment, over-payments and discrepancies raised over purchases related to drugs and medical supplies.

Following a furry of inconsistent answers being provided by Region Executive Officer Region 10, Orin Gordon and his team, the Officers were upbraided by Committee Chairman Ali, and Committee Member Volda Lawrence—Minister of Public Health and former PAC Chair.

During the course of questioning Mrs. Lawrence was forced to outburst, “…what nonsense are we hearing here,” in response to what was a clearly incorrect answer provided to PAC from the Region 10 team over its use of evaluators.

Ali told those providing answers to PAC, “there is no need for you to try to bluff us when you answer; we are going to check and when we check and you find that you are bluffing you create more problems for me and for yourself, answer honestly and clearly.”

It was at this point during the PAC discourse the Chairman indicated that persons will soon be administered the oath in order to sanitise further, future reports to be sent to the Full House. “In next report to the house when it accepted that will be the case…When you under oath and you give misleading answers it will be a different ballgame, let us start getting accustomed to answering correctly, openly and transparently to,” Ali cautioned.