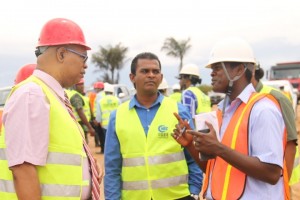 People’s Progressive Party (PPP) parliamentarians plan to boycott a tour of the Cheddi Jagan International Airport development project, but intends to ask for an audit of the project that is supposed to cost US$150 million, mostly  through a loan from China.

“We are aware that significant alterations and changes have been made to the design. It is our intention, and we will at the appropriate time, call for a performance audit of this project, to ensure that the Guyanese people got value for their money and what was paid for was delivered,” said PPP parliamentary spokesman on Public Infrastructure, Juan Edghill.

Edghill had in the past participated in a similar site visit of the project, but said that on this occasion none of the PPP lawmakers would go on the tour planned for April 27 to give the government an opportunity to show off purported transparency. “The Parliamentary Opposition will not participate in any charade, of any kind, at any time, to lend any semblance of legitimacy and to camouflage any appearance of transparency to this unaccountable administration,” said Edghill, a former Junior Finance Minister.

The PPP back-bencher stopped short of saying that his party, which holds 32 seats in the National Assembly, would object to requests by government for more money to complete the project. “I suspect the reason that we have had the entire Cabinet visit this PPP/C project and now an invitation to the entire Parliament, is that the environment is being prepared for supplementary request and approval for more monies for this fixed price project. At the appropriate time, in the National Assembly, we will address these matters,” he said. Even if the PPP objects strongly to any request for more money to finish the project, government would use its 33 seats to approve the supplementary request.

The project was conceptualised and funding obtained by the then People’s Progressive Party (PPP)-led administration with the aim of making the Cheddi Jagan International Airport a hub, accommodate larger aircraft and boost business and other types of tourism.