The DPP’s Chambers said the allegations should have been first reported to the Guyana Police Force. “These charges concern a grave issue under the criminal law in relation to two serving Ministers. In the interest of good governance in the State of Guyana such allegations ought first to have been reported to the Guyana Police Force for an investigation to be launched and the advice of the DPP sought,” the DPP’s Chambers said.

Attorney General, Basil Williams had said at the weekend that the private criminal charges against Norton and Lawrence had not emerged from an investigation. 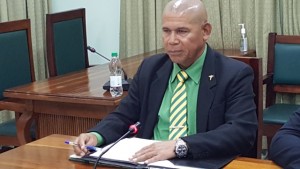 The DPP Chambers said she discontinued the charges under Article 187 (1) ( c) of Guyana’s Constitution. The PPP had levelled the charge of misconduct in public office on the grounds that she had instructed the Georgetown Public Hospital Corporation to buy more than GY$600 million in drugs from Ansa McAl without first going through the procurement process.

In the case of Norton, he had been accused of renting a building on Sussex Street, Albouystown for GY$14 million per month for the storage of drugs and other medical supplies. However, that deal did not pass through the procurement process.

Though Nandlall had denied that the charges against Norton and Lawrence had not been a tit-for-tat, observers believed that it was in direct response to charges of misconduct in public office by the Special Organised Crime Unit of the Guyana Police Force against former Finance Minister, Ashni Singh and former Head of the National Industrial and Commercial Investments Limited, Winston Brassington in connection with the sale of three large parcels of land for just over GY$900 million allegedly without regard to the valuation process.

Nandlall has since asked the DPP to review and possibly discontinue those charges.