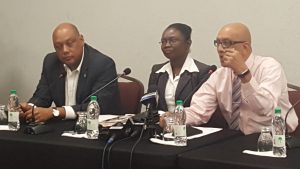 Under increasing pressure from the Board of Directors and staff of the Guyana Geology and Mines Commission (GGMC), the Ministry of Natural Resources has announced that the Guyana Gold Board’s (GGB) mercury polluting laboratory would be moved from the Brickdam location that both agencies share.

“Noting the Minister’s previous statements and the GGB’s and GGMC shared conclusion that it was in the best interest of all that the laboratory be re-located, the critical decision was today taken that the laboratory would be moved within the shortest possible time so as to safeguard the health of workers of the GGMC and Gold Board,” the Ministry of Natural Resources said in statement issued late Friday night.

No deadline was fixed or locations named in the statement, but the ministry said “in the coming days suitable sites will be scouted for both short and long term solutions.”

The Natural Resources Ministry said eventually all of the Gold Board’s operations would be removed from the Brickdam location.

That decision emerged from a special meeting the Ministry of Natural Resources held with GGMC and GGB, after the GGMC’s Board on Thursday recommended that that regulatory agency be closed until the laboratory be removed and the GGMC’s premises be scrubbed of all mercury residue. That decision was taken long before a review team, headed by Dr. David Singh, has completed its work including the identification of possible sites for the lab which burns gold taken by miners to the Gold Board for sale.

About 60 or more workers have already tested positive for above normal mercury levels and have been sent on medical leave with medication and vitamins to remove the chemical from their bodies.

Trotman has already highlighted the need for proper security and the continuation of gold sales, positions the ministry reiterated after the meeting with the GGMC and GGB management.

“All parties in attendance recognised the critical contribution of gold to the Guyana economy, and by extension, the Guyana Gold Board, and in that regard, resolved to cooperate to ensure the minimal disruption of operations,” the Natural Resources Ministry said.

Meanwhile, the Guyana Public Service Union, which said it is still represents GGMC workers, wants the GGMC’s management and the Ministry of Natural Resources to hold talks with that bargaining agent and arrive at a “verifiable” solution in the interest of workers’ safety.

“Having regard to the urgency of this matter, the GPSU has communicated with both the Commissioner of the GGMC and the Minister of Natural Resources seeking engagement, the option which we believe is the desirable one for arriving at a verifiable initiative designed to ensure that concerns relating to the safety and health of the workers is addressed quickly and responsibly and ion a manner that can be verified and properly monitored by all of the parties,” the union stated.

The newly-formed Guyana Civil Service and General Workers Union (GCS&GWU) made up mostly of GGMC workers, who are disgruntled with the GPSU’s representation, says it has been meeting with management on the issue.

The (GCS&GWU) has said that it was not comforted by the findings of the Trinidad-based Kaizen Environmental Consultants that mercury levels at the GGMC were below harmful levels because the ongoing burning of gold results in continuous release of the chemical into the atmosphere even if at very low levels.