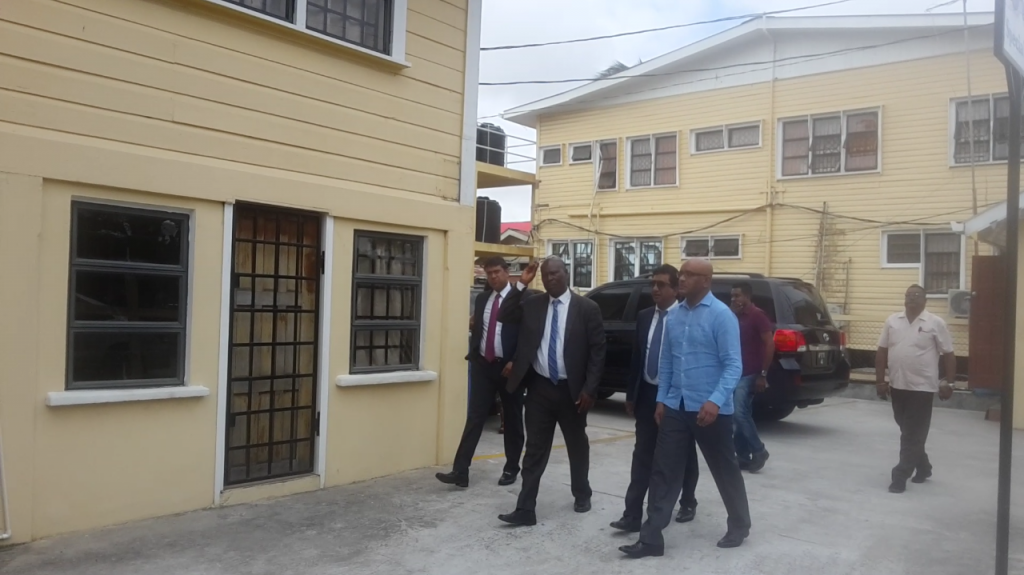 FLASH BACK: Opposition Leader Bharrat Jagdeo being escorted into SOCU’s headquarters building by the Head of that agency, Assistant Commissioner Sydney James to be questioned about the acquisition of land at Pradoville 2.

Even as the Guyana government slammed the People’s Progressive Party’s (PPP) filing of private criminal charges of misconduct in public office against two government ministers as an effort to distract the public from its record of corruption, Opposition Leader Bharrat Jagdeo said more charges would be filed against other ministers.

“The charges that were filed today against the current and former Minister of Public Health is the PPP’s cowardly attempt to draw public attention away from its own sordid record of corruption while in office,” Minister of State, Joseph Harmon said in a statement.

However, Jagdeo recalled that his party had long spoken about private charges, and his party was now merely using government’s standard of misconduct in public office by way of three counts connected to the sale of three large tracts of land of more than GY$900 million by former Finance Minister, Dr. Ashni Singh and former Head of the National Industrial, Commercial and Investments Limited (NICIL).

Reiterating that Singh and Brassington had acted on his Cabinet’s approval, Jagdeo put the David Granger-led administration on public notice that more charges would be laid against political functionaries. ‘This is not the end so we are not stopping at these charges. There are several others who would be charged,” he said.

And the Minister of State also said more charges would be laid against former functionaries of the Jagdeo and Donald Ramotar-led People’s Progressive Party Civic administrations. “The PPP is aware that more charges are soon to be filed against high public officials who served under the Jagdeo and Ramotar administrations. These charges are a result of months of intense investigation by Commissions of Inquiries and evidence gathered by the Special Organised Crime Unit (SOCU) of the Guyana Police Force,” said Harmon.

The State Minister said Guyanese would “not be swayed by the legal shenanigans of the PPP, which, in effect, make a mockery of the legal system.”  “This Government will continue to take the necessary steps to ensure that those who held public office and engaged in malfeasance while in office are brought to justice.”

With the Special Organised Crime Unit of the Guyana Police Force having already arrested and questioned Jagdeo and several other former government ministers about the sale of housing lands at Goedverwagting-Sparendaam (Pradoville2), the former Guyanese leader said he was not worried about being charged in connection with those transactions. “I don’t care! They will do what they have to do. I made it clear: you go ahead and you throw the worst at us because that is the expectation. They have approached this politically from the beginning,” said Jadgeo who enjoys immunity from legal action for acts carried out as president.

“We are sure that in the matter before the court the actions of our ministers will be vindicated,” he said.

Harmon labelled the PPP’s charges as a “nuisance”. “The nuisance value of today’s legal action is just another attempt by a political party; the PPP that is aware that investigations have revealed that during its tenure the nation was losing billions of dollars each year through procurement fraud and other corrupt activities by senior public officials.”

Norton, as then Health Minister,  is charged in connection with the rental of building on Sussex Street, Albouystown, Georgetown for GY$14 million per month to store pharmaceutical. Lawrence is charged with instructing the Georgetown Public Hospital to purchase more than GY$600 million in pharmaceutical supplies from Ansa McAl without any public tender and 100 percent above the market value.

In the charges seen by Demerara Waves Online News, Singh- in his capacity as then Finance Minister and NICIL Chairman- and Brassington on May 14, 2011 by way of an agreement of sale and purchase “acted recklessly when they sold Multicinema Guyana Inc. a 10 acre tract of State land at Turkeyen for GY$185,037,000 without first having procured a valuation from a competent valuation officer. Similarly, they are accused of selling 103 acres of state land, by an agreement of sale and purchase, to National Hardware Guyana Limited for GY$598,659,398 (VAT exclusive) with first procuring a valuation. The third and similar charge also has to do with the sale of 4.7 acres of land for GY$150 million to Scady Business Corporation, “knowing that the said property was valued at GY$340 million by Rodrigues Architects Associate, a competent valuation officer.