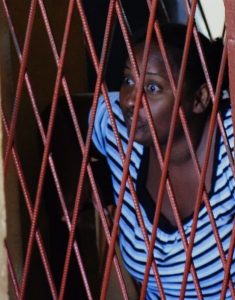 A woman, who allegedly tried to smuggle marijuana into the Georgetown Prison to her murder-accused husband, was refused bail.

Nichola Clarke, 37, of 57 Joseph Pollydore “D’urban” Street, Lodge was remanded to prison until May 30.

Appearing before City Magistrate, Fabayo Azore, the woman plead not guilty to being in possession of narcotics for the purpose of trafficking.

The particulars of the charge are that on April 17, 2018 at the Georgetown Prison, Camp Street, she had in her possession 325 grammes of marijuana.

Investigators said Clarke waa visiting her reputed husband, who is remanded for murder, when a search revealed the marijuana, covered with rice, in a food box