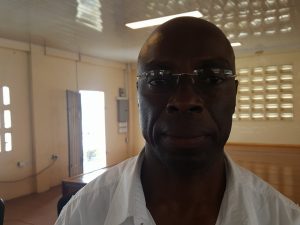 Chairman of the National Council for Occupational Safety and Health, Earl Morris.

The Ministry of Social Protection’s Occupational Safety and Health Department on Thursday rubbished claims by the trade union representing Guyana Geology and Mines Commission (GGMC) workers that their concerns about mercury poisoning have been ignored.

Chairman of the National Council for Occupational Safety and Health (NACOSH), Earl Morris stressed that “that’s not true” and persons could easily make erroneous conclusions in the absence of information. “It’s unfair for them to say that and I would like to dispel that. We have their interest at hand just like any other worker and it’s our intention to join (with the union) to ensure that a proper investigation is done,” he said.

The newly-formed Guyana Civil Service and General Workers Union, which represents GGMC workers, has begun dispatching letters to the Social Protection Ministry, National Insurance Scheme, Ministry of Public Health and President David Granger expressing concern that they have been silent on the issue of mercury poisoning.

Demerara Waves Online News was told by an official that for the first time since GGMC workers began being tested positive for mercury poisoning  one month ago that management of that regulatory agency last week reported to the Social Protection Ministry that there was an issue of workplace safety.

The headquarters of the Guyana Gold Board, Brickdam, Georgetown.

The Occupational Safety and Health Department of the Social Protection Ministry has since launched a probe which, according to sources, would include the findings and recommendations of a review committee that has been established by the Ministry of Natural Resources. The Trinidad-headquartered Kaizen Environmental Services has already conducted tests at the GGMC/Gold Board location and has reported that measurements show that mercury levels are safe.

“The whole idea is to identify what went wrong, then to be able to put measures in place to correct it so it is the intention to have an investigation done from our stand-point, working with the Ministry (of Social Protection),” Morris said.

Officials said more than 30 GGMC workers and several others from the Guyana Gold Board have been tested with high mercury levels as a result of emissions from the Gold Board’s laboratory which is located in the same Brickdam, Georgetown compound with the GGMC’s headquarters.

The mercury-poisoned GGMC workers have begun receiving treatment and have been granted sick-leave.

The Ministry of Natural Resources-commissioned review team is in May, 2018 expected to recommend, among other things, whether the Gold Board’s laboratory is functioning in a safe and environmentally friendly manner, and if not, to propose how to improve its service. The Committee has also been mandated to examine suitable and secure sites for the relocation of the laboratory and to make recommendations accordingly.”