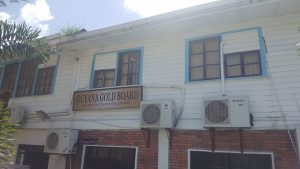 Workers of the Guyana Geology and Mines Commission (GGMC) are threatening protest action if other relevant government agencies remain silent on mercury poisoning by emissions from the Guyana Gold Board.

President of the Guyana Civil Servants and General Workers Union (GCS&GWU), Gregory Gaspar said his newly-formed trade union is demanding that the GGB either shuts down the laboratory or invests in new technology that retains and recovers the mercury instead of emitting it into the atmosphere. “Right now, they have the scrubbers but there is something after the scrubbers that they could use to bring back the mercury to those droplets without it coming back into the atmosphere. I think that is very costly, let them spend the money and do that,” Gaspar told Demerara Waves Online News.

The union said it was dissatisfied that no immediate actions have been taken to halt the operations of the Guyana Gold Board, and to eliminate the offensive mercury emissions, leaving staff susceptible to continuous mercury poisoning.

Minister of Natural Resources, Raphael Trotman has already announced that a review team has been tasked to examine what should be done with the Gold Board’s laboratory which is housed in the same Brickdam, Georgetown compound with the GGMC.  However, that move was rubbished by the GCS&GWU: ” The appointment of a committee to investigate all aspects of the functionality of the Gold Board’s laboratory fails to address the immediate concerns of affected staffers, and we condemn all attempts to trivialize this matter. This is a national crisis and we are demanding that it be treated as such.”

Although Kaizen Environmental Services has said that environmental tests show that there is no need for worry, the union official said he was worried that .2 emissions from the burning of gold being sold to the GGB would cumulatively have an adverse impact on workers because it would build up in offices.

More than 60 workers have already been tested positive for high mercury levels and have been sent on leave to take medication and vitamins. “We are having people going on medication for thirty days and after that they will return to the same environment in which they were ‘infected’ in the first place,” said Gaspar whose mercury poisoning level is 13.

The GCS&GWU on Monday decided to write several government agencies- Ministry of Social Protection’s Occupational Safety and Health Department, the Ministry of Public Health, the Poisons Board, the National Insurance Scheme’s Inspectorate and President David Granger- because they have so far remained silent since the issue of mercury poisoning surfaced several weeks ago.

“We  just want to bring it to their attention because I don’t think anybody is coming out and saying anything and you would expect these persons to say something,” he told Demerara Waves Online News.

Gaspar said workers were prepared to engage in protests if they do not receive favourable responses from the agencies within one week.

Saying that “we have exhausted all conceivable efforts with the Commission”, the union slammed the authorities for showing less than a satisfactory response. “The declarations and reactions show significant insensitivity for the staff and those concerned. This direction is unacceptable and bears little or no respect for the lives and welfare of those affected,” the GCS & GWU said.

The GGB does not use mercury but emissions occur when that agency burns the precious metal taken there for sale by gold miners.

The Ministry of Natural Resources has said that the review committee is headed by Dr. David Singh, who holds a doctorate in Chemistry and is currently the Executive Director of Conservation International – Guyana, and includes, Mr. Keith John, retired  Assistant Commissioner of Police, and one member each, from the Guyana Geology and Mines Commission and the Guyana Gold Board. Work will commence on Wednesday, April 18, 2018, and a report will be submitted within one month.

“The appointment of the Committee follows on a public commitment made by the Minister to have a team of experts review the operations of the Gold Board’s laboratory to ascertain whether the laboratory is functioning in a safe and environmentally friendly manner, and if not, to have recommendations made for its improved service. The Committee has also been mandated to examine suitable and secure sites for the relocation of the laboratory and to make recommendations accordingly,” the ministry added.