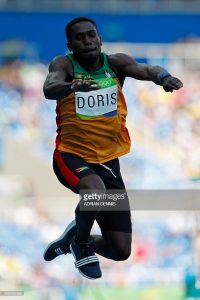 Jones said he has already made efforts to contact Doris to ascertain when he would be coming to Guyana or if he would be here for the National Sport Award scheduled for May 24, two days before Guyana’s Independence anniversary. “That would provide us with an opportunity to bestow upon him the necessary for his achievement,” the Director of Sport said.

Doris earlier Saturday won the triple jump for Guyana with his 16.88 metre leap from the second round at the Games held at Gold Coast, Australia.

Jones told Demerara Waves Online News said he was “excited and expected” at Doris accomplishment because he was monitoring the athlete’s  daily training in the United States (US) during the past several months. “There was a clear intent to make gold and, trust me, he fell nothing short of our expectations that he would have brought home gold,” he said.

With Doris having placed Guyana’s flag on the world stage once again several years after Aliann Pompey had won gold at the Commonwealth Games, he said their success was testimony to the wide variety of support that the country provides its athletes.

The Director of Sport and the Minister of Sport said they would have to make the necessary representation to the Executive to explore whether Doris could be more tangibly rewarded for his accomplishment.

“I am delighted because I think that while our neighbouring Caribbean countries are doing well, it was time for us to strike that gold. I am not looking at that for the Commonwealth Games. I am particularly looking at it for the Olympics and, of course, the World Championship,” he said.

The Sport Minister said the ministry was not expected to “fall short” in recognising Doris.