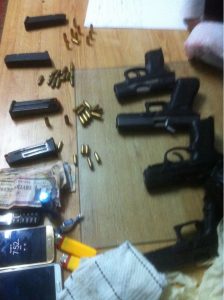 Six men have been arrested in connection with the alleged discovery of four handguns and numerous rounds of ammunition, after they failed to rob an East Bank Demerara poultry farmer, police said.

The Guyana Police Force said two 9 MM Glock pistols, one of whose serial number was filed out, along with twenty two live rounds; one Beretta pistol with eleven live rounds, and one . 32 Taurus pistol- serial number filed out- with six live rounds were found in their possession

The man told police that he was at home relaxing with his two sons, when he was awakened by noise from the eastern door. He said upon investigating he observed four men in his yard, he raised an alarm and the suspects escaped in a waiting motor car HC 4543.