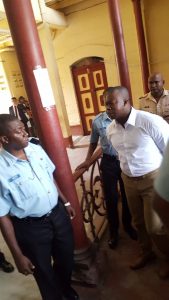 A sobbing and red-eyed Guyana Defence Force (GDF) Captain Orwain Sandy was Friday arraigned on a charge of murder, after he allegedly gunned down his reputed wife at Alexander Village almost one week ago.

Shackled and handcuffed, Sandy was not required to plea to the indictable charge when it was read to him by Principal Magistrate, Judy Latchman. He sobbed , gazed at the courtroom roof a couple of times and wiped his faced with his handcuffed hands.

He was remanded to prison until April 24, 2018 at 10 AM.  Latchman acceded to Defence Lawyer, James Bond for his client to undergo psychiatric evaluation by Psychiatrist Dr. Bhairo Harry and an independent psychiatrist.

“This examination is critical to my client’s care, not only his welfare but also his well-being which I know the Court is well-guarded against,” Bond told the Court. He also told the magistrate privately the name of his preferred psychiatrist.

He is accused of the murder of Reona Payne on March 31, 2018 on First Street, Alexander Village. An autopsy revealed that Payne, who was a travel agent at Muneshwer’s Travel Service, received multiple gunshot injuries.

Chief Magistrate, Ann Mc Lennan, who is a serving army Colonel,  did not preside over the arraignment.

After the woman was shot, the 36-year old man surrendered with his service pistol to the nearby Ruimveldt Police Station.

The former Aide-de-Camp to the GDF’s Chief-of-Staff was neatly clad in a white shirt, un-belted khaki pants and brown shoes.

Bail is very rarely granted in exceptional circumstances to persons charged with murder. He would be subjected to a Preliminary Inquiry at the Magistrates’ Court to determine whether there is sufficient evidence for him to face trial by a High Court judge and jury.

The GDF said Sandy has been interdicted from duty and a Board of Inquiry has been established to probe the incident. Sandy has been already questioned by army investigators.

Sandy, who two years ago graduated from the University of Guyana with a Bachelor of Social Sciences Degree in Sociology, was regarded by his peers as progressive and potentially a future Chief-of-Staff.

The Defence Lawyer said Sandy enlisted in the army as a private and “he has had an unblemished record”.

When Sandy was placed in the dock at 9:12 AM, his lawyer spoke with him before the Court’s session began less than five minutes later.