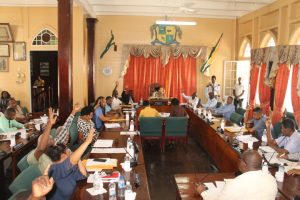 Despite strong objections by a vocal minority of three Georgetown City councillors- two from the People’s Progressive Party and one from Team Legacy- the bylaws were approved  Wednesday afternoon by a majority vote.

The bylaws are to be posted up at several places across the City for 14 days before they are sent to Local Government Minister Ronald Bulkan for approval and published in the Official Gazette.

Voting ‘no’ were PPP Councillors Khane Shame and Bisham Kuppen. Those abstaining were Malcolm Ferreira and Carlyle Goring. Nine other councillors, including the Alliance For Changes Sherod Duncan and Lionel Jaikarran and A Partnership for National Unit’s Gregory Fraser were absent.

Only four councillors- the People’s Progressive Party’s Khane Sharma, Bisham Kuppen, A Partnership for National Unity’s Heston Bostwick and Team Unity’s Malcom Ferreira- spoke for the allotted two minutes each only on the bylaws. 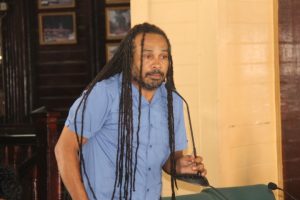 Ferreira warned against voting for the bylaws before the High Court rules on a pending case that has challenged the legality of the deal between City Hall and Smart City Solutions. “We need to exercise caution and allow the court to rule so as to offer legal guidance as well as endorsement of whatever decision we decide is best to move forward with. We should not rush into any decisions and more so decisions that have proven to be unpopular and some of those decisions even had the government to intervene to protect citizens,” he said.

Saying that it was impossible for him to abide by Mayor Patricia Chase-Green’s directive that councillors speak only on the bylaws and not the contract, Kuppen stressed that the bylaws were linked to an allegedly illegal contract between City Hall and Smart City Solutions because it was not open to 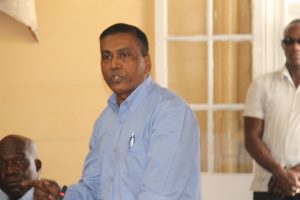 public tender but was instead sole-sourced. “The fact of the matter is that we are attempting to pass or approve bylaws for a contract that has yet not being proven to come about in a legal manner so there were indications made that this was approved by the previous Council but there is no evidence that has been produced so far to prove that and the fact of the matter is that due diligence was being conducted after the fact when in fact it should have occurred before that contract,” he said.

Kuppen noted that the amended contract was not sent back to the Ministry of Finance, Ministry of Legal Affairs or Cabinet because it is clear that some “issues were not yet addressed” at the time that Central Government had intervened and ordered a review of the deal. He added that no probe was conducted to ascertain whether the investor’s cash was clean or dirty money.

Bostwick said it was necessary for City Hall to move ahead with the parking meter project or eventually the Councillors and administration could eventually be sued by SCS. “I think that the only time that Councillors would be serious and recognise the legality of the contract is when the concessionaire’s patience runs out and then the Mayor and City Councillors have challenges in the court which many of us will not even be prepared to pool our stipends for the legal assistance to come up with that,” he said. 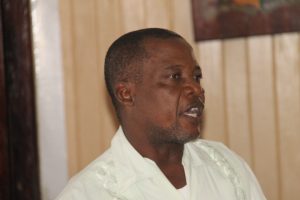 In January, Chairman of the Parking Meter Negotiating Committee, Akeem Peter had reported that coming out of those talks with SCS, the new rates would be GY$150 per hour or GY$800 for eight hours. The tickets could be used at any of the designated parking areas around the city instead of fixed locations as had been previously envisaged.

When metered parking had been activated last year, the rates had been GY$250 per hour after it had been reduced from the original rate of GY$570 per hour for fixed parking spots.

City Hall has already agreed, coming out of those negotiations, that it would retain the 80-20 gross earnings split instead of the 50-50 net revenue split for fear that the concessionaire could potentially jack up operational expenditures.