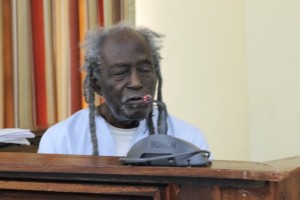 FLASH BACK: Eusi Kwayana testifying before the Walter Rodney Commission of Inquiry.

Kwayana, a long-serving executive member of the Working People’s Alliance (WPA), contended that the removal of those columnists from newspaper columns is an act of repression. In apparent reference to Minister of State, Joseph Harmon; President David Granger and Alliance For Change (AFC) Leader, Raphael Trotman, Kwayana noted that all executives who are ministers and who might have been suspected of giving the orders have denied doing so.

“The removal of columnists named from newspaper columns is an act of repression. Speaking only for myself in the hope that no one else will be held responsible for my remark, I see this act of as Burnhamism plain and simple,” said Kwayana in clear reference to late People’s National Congress (PNC) leader and President of Guyana.

Kwayana recalled that Burnham said in 1973 in Barbados, in response to questions about his treatment of freedom of expression had made the cryptic remark: “In Guyana we don’t tell people what to write we tell them what not to write”.

He noted that so far there have been no denials that the Guyana Chronicle’s Editor has admitted to “imposing the ban acting in his own discretion”, but no proper reason has been given. “He does not say that he suspected the writers of any breach of professional ethics and drew it to their notice without success, or whether their fault was evidence of a common design against the Chronicle,” said Kwayana who is also a former executive member of the People’s Progressive Party and former PNC General Secretary.

Kwayana saluted the decision by the four Board Directors of the Guyana National Newspapers Limited, publishers if the daily and Sunday Chronicle.

In expressing “grave concern” at the removal of Hinds and Lewis as columnists, the Pan African Movement Guyana Branch said those men played vital roles in confronting the People’s Progressive Party which was in power from 1992 to 2015.

“The Pan African Movement wishes to remind those who made the decision of the valuable role that both these gentlemen have made to the struggle against the injustices of the PPP and in particular the injustices against the African,” that organisation said.

Also of concern to the Pan African Movement is the “negative picture that the decision has raised about press freedom in Guyana and the tolerance for alternative viewpoints.”  “The Organization wishes to remind makers of the decision that the Guyana Chronicle is not Political party organ but an organ of the state- the people of Guyana,” that organisation added.

President Granger and AFC Leader Trotman have said they had nothing to do with the decision, but at the same time they wanted more public information and government’s programmes and policies reflected.