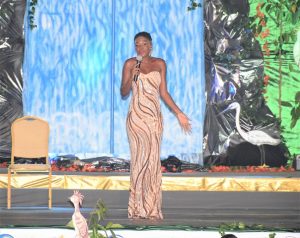 Winner Arian Dhalia Richmond dedicated her song to those who are victims of abuse during the talent segment.

It was a clean sweep for Arian Dhalia Richmond at this year’s Miss Bartica Regatta Pageant. The 19-year-old Bartican dominated throughout the talent, swimsuit and evening gown segments on Saturday night.

Government’s Department of Public Information reported that Richmond was crowned the Regatta Queen in the early hours of Sunday morning following a late start of the show which was held on the basketball court at the Community Centre Ground, Second Avenue.

Along with the crown, Richmond also copped the Miss Intelligent, Miss Body Beautiful, Miss Multimedia and Best Gown awards on pageant night. Richmond, who was the crowd’s favourite throughout the competition, demonstrated the poise and elegance that a pageant stage demands.

Richmond crooned her way to the top in the talent segment with a song she dedicated to the victims of abuse. Meanwhile, first runner-up Kasherell Payne, and second runner-up Takeisa Boston were also impressive during the pageant. In a talent segment heavily favouring dance routines, Boston was the best dancer of the night, however, Payne stood out with her spoken word piece 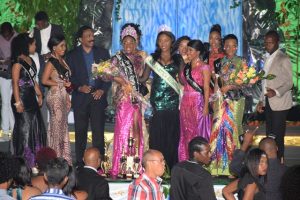 The ladies stunned in their evening gowns but it was Richmond who owned the stage with the display of her gown. At the end of the night, the three young ladies were left with the judges’ questions.

When asked what would she do if she had a day for herself, Richmond replied that she would bring the country’s leaders together to address the issues affecting youth in the community of Bartica and across the country.

The Regatta Pageant, a staple in the Easter Regatta calendar of activities, was a night of elegance before the powerboat day. Chief Judge in the evening’s proceedings was 1998 Miss Universe, Wendy Fitzwilliam from Trinidad and Tobago.