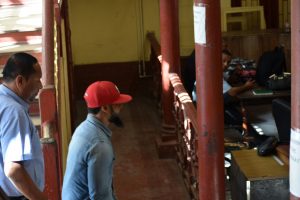 WANTED FOR MURDER IN THE UNITED STATES: Troy Thomas being escorted in the compound of the Georgetown Magistrates’ Court on Wednesday.

Hours after a Guyanese man, wanted for murder in the United States (US) was arrested, he was remanded to prison pending the start of extradition proceedings.

Thomas was arrested at a location in Liliendaal, East Coast Demerara at about 2 AM  Wednesday morning.

A representative from the United States Embassy during the court hearing requested full disclosure of statements by Tuesday so that the process can start.

The extradition process is set to begin on March 23 and, if the State is successful, he would be extradited to the US.

The prosecution objected to bail and he was remanded to prison. 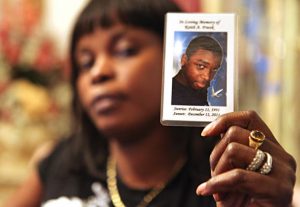 Carol Kyte holds a picture of her son, Keith Frank, who was killed by gunfire outside a party. (Times Ledger Photo by Christina Santucci)

Thomas is accused of murdering Keith Frank on December 11, 2011 in New York.

The Guyana Police Force said Thomas “fled the United States of America after an arrest warrant was issued.”

Investigators said make-up artiste and Social Media personality Lolita “Lola” of East Ruimveldt has been arrested on suspicion of habouring the fugitive.

She was also wanted for threatening behaviour.

Twenty-year-old  Frank was killed in a flash of violence outside a South Richmond Hill party that left an 8-month-old girl without a father.

Keith Frank, who moved to Queens from Guyana when he was 12, died exactly two months before his 21st birthday after he was shot once in the torso at around 4:45 a.m. Dec. 11, according to the New York Police Department had said.

Frank was attending a birthday party near 132nd Street and 109th Avenue and ran into some other men with whom he had a ongoing beef, according to his mother, Carol Kyte.

2018-03-14
Denis Chabrol
Previous: Guyana Chronicle’s Board divided on ‘No Lewis, No Hinds’ as columnists; slim majority vote keeps them out
Next: Guyana Chronicle columns critical of govt raised at Cabinet; Granger called out