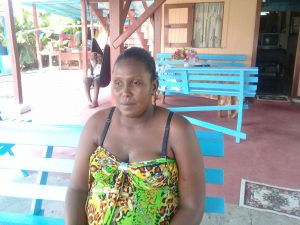 A family of six is now counting their losses and contemplating their next move, after a fire of unknown orgin destroyed the house at 116 Block 2 Albion, Corentyne home that they were renting.

The fire  which occurred on Tuesday at around 11am,  reduced the two bedroom, two-storey wooden structure to ashes Nothing was saved.

According to Gangi Ganesh, 58, a neighbour who was home at the time of the blaze, she felt heat emanating from the building.

“I call for neighbors fire fire and no one didn’t answer, but the Albion Estate fire truck come.”

Shennisa Willie, 27, who occupied the upperflat of the house with her family was still visibly shaken while speaking with Demerara Waves Online News. She said that at 9am Tuesday after preparing her children for school she left to go at her landlady. As she pointed to the vegetables she went to drop off; the pregnant woman noted that nothing was left lit in the house. According to Willie, after learning of the incident she hurried to the scene but it was too late to save anything. The woman has nothing left besides the dress she was seen wearing on Wednesday. She is a teacher at the community-based rehabilitation center
for children with disabilities located at Port Mourant. Her husband, Damion Simon, is a taxi driver. 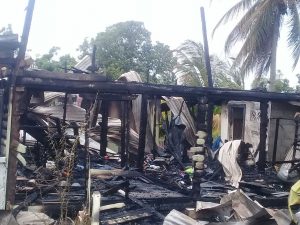 The burnt remains of the house where Teacher Shennisa Willie and her family lived.

Meanwhile, the landlady, Soomattie ‘Pooni’ Mohammad , suspected that the fire was the work of arsonists. She noted that the neighbour, who she described as disrespectful, would always initiate disagreements with persons. She recalled several times during her time living at the property, reports had to be made to the Police Station after the said neighbour had allegedly  stolen from them. She remain adamant “they always does be in problem and they would do something like that.” According to the woman, a report was made to the police station and an investigation was launched.

Mohamed further stated that her tenant does not speak to the neighbors because of the was they would behave. “They are Christians so certain things the neighbors does behave with they don’t, they don’t drink or so. Quiet people and that why I rent the house to them. She have children too.”

The now homeless family calls for assistance. Should anyone like to assist Willie can be contacted on the numbers: 6725363/6138434.