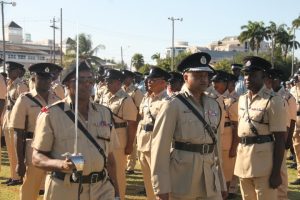 Police Commissioner Seelall Persaud inspects the Guard of Honour at his farewell parade.

“If you look historically over the past twenty-five years, you would see that all the Commissioners, maybe with the exception of one, granted themselves firearm licences,” he said shortly after his farewell parade.

With regards to the self-granting of a firearm dealership, he said the records also show that in the 1980s, a then outgoing Police Commissioner had also done so. He said he decided to apply for the dealership certificate so close to his retirement because the business would have started only after he retires in April at the end of 34 years. “It’s a business. I can’t do business on the job and it will only operationalised after I leave the job,” he said, adding that he has since decided not to pursue that line of business anymore.

Meanwhile, Acting Prime Minister  and Minister of Public Security Khemraj Ramjattan declined to speak with the media again on the issue and when pressed by reporters, he said “haul yuh ass”.

Reporter: Did the application for firearm licences come to your desk or through the Firearm licensing board?

Earlier Wednesday, Ramjattan  also used his expletives when Demerara Waves Online News sought a clarification on the process that Persaud used to comply with an instruction to revoke the licences that he had granted himself.  “What the f..k you trying to tell me?”, he said.

He urged reporters to have a time and place. When Ramjattan reminded that he had spoken with Demerara Waves Online News earlier in the day, he was told that he had also used indecent language during that telephone call. His unapologetic response was, “Yes, there are times when I could use expletives”. The Minister, who is also a Second Vice President, said “I am not dodging no issue” when pressed for further details on the issue.

Ramjattan’s posture towards the media is reminiscent of the way the media was treated by then President Bharrat Jagdeo under the then People’s Progressive Party Civic-led administration.

Reacting to the Public Security Minister’s decision to order him that the licences he self- granted, the Police Commissioner remarked that. “we live in a society today where one set of circumstances is good for one person but is not good for the other.” Government was represented at the Farewell Parade by Ramjattan and Minister of Citizenship and Immigration, Winston Felix who is also a former Police Commissioner.

News of Persaud granting himself a firearm dealer’s licence on January 29, 2018 for Professional Outdoor Supplies first appeared in the state-owned Guyana Chronicle newspaper on Wednesday, February 28, 2018-the same day he will host a farewell parade as he goes into retirement.

Well-placed sources said the issue of the Police Commissioner granting himself a firearm dealer’s licence and licences for one 9 MM pistol and one pump action shotgun was discussed at Cabinet.