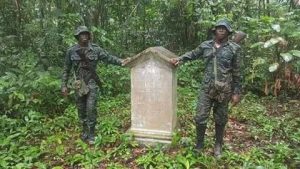 GDF soldiers at a border marker .

President David Granger on Tuesday said he has instructed the Guyana Defence Force to brief the bipartisan parliamentary committee on security about steps being taken to secure communities located along the 800 kilometre border with Venezuela as a result of the unstable situation in that country, as well as the ongoing border controversy.

The President explained that the unstable situation in Venezuela has resulted in a surge in illegal migration, which in itself, has the potential to open avenues for illegal activities such as gun-running and narco-trafficking. “It has alerted us to the need to make sure that our border locations; these frontline villages are not isolated and we have to do much more in years to come in developing communication and in developing infrastructure. [We have to] make sure that our children go to school… We must erase the difference between coastland and hinterland,” he was quoted as saying in a statement issued by the Ministry of the Presidency.

A senior Region One (Barima-Waini) official told Demerara Waves Online News that after an illegal entry point was choked off, another one has since been opened elsewhere and Venezuelans have continued to seep across the border in search of food, medicines and shelter.

Granger, who heads to Baramita, North-West District on Wednesday, indicated that he expects that even as Government continues to work at the central and regional levels to ensure security in the border regions that civil society will continue to be fully briefed.

Speaking during a brief interview today, he assured Guyanese that Government is concerned about security and is deeply involved in ensuring their safety. He said, “At the Defence Board meeting that was held last Thursday, I instructed that the Guyana Defence Force should brief the Parliamentary Committee on security to let them know what preparations are taking place and I expect that there will be full participation both by members of the Government side and the Opposition side. If necessary, we will take this to civil society and I have already briefed the Chief of Staff of the Guyana Defence Force, that civil society must be aware of what is taking place. So, we are operating at different levels; we are operating at a local level in the villages, in the frontline villages themselves.”

President Granger referenced the Frontline Village Policy that was announced during his visit to Whitewater, also in Region One, earlier this month, which includes the setting up of military patrol bases and heightened 24-hour security by the GDF and the Guyana Police Force. The Commander-in-Chief, who chairs the Defence Board, has taken the lead in conducting outreaches to the frontline communities, to interact with residents and assure them of the Government’s commitment to their safety. It because of this priority situation that he chose to remain in Guyana and let Foreign Affairs Minister, Mr. Carl Greenidge attend the 29th Inter-sessional meeting of the Conference of Heads of Government for the Caribbean Community (CARICOM) in Port-au-Prince, Haiti in his stead.

Expressing satisfaction with the role the Regional Chairman of Region One, Mr. Brentnol Ashley, has been playing and the participation of the Regional Chairman of Cuyuni-Mazaruni (Region Seven), Mr. Gordon Bradford through the regional security mechanisms, the Head of State described the work in the regions as non-partisan. Noting his visits to Whitewater and Kaikan, he said, “I am very glad that in both cases we saw the presence of the Regional Chairman. In Region One the Barima-Waini region he actually came out with me to Whitewater. In Region Seven the Chairman actually came out with me. Sometimes they have been complaints about the attitude of Regional Chairmen but I was very heartened that this is not seen as a partisan matter; that it is seen as something that affects the whole country.”

Last Thursday, at his post-Cabinet press briefing, Minister of State, Mr. Joseph Harmon informed that Cabinet has adopted a concept note on a Frontline Village Policy, which is aimed at greater inclusion of all communities on our national borders in the body politic.