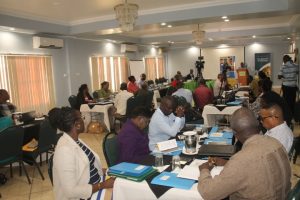 The Finance Ministry’s ‘clinics’ with Regional Executive Officers and Permanent Secretaries about what needs to be done to accelerate the implementation of projects is showing signs of bearing fruit.

Minister of State Joseph Harmon on Monday said government is making progress in increasing the pace at which multi-million dollar infrastructural projects of the Public Sector Investment Programme (PSIP) are being implemented. “Based on the overall assessment, there has been significant improvement in the performance of ministries, departments and regional organisations with respect to the spending and with respect to performance under the PSIP,” Harmon said.

He told the opening of a ‘Public Policy Analysis Management and Project Cycle Management training programme being conducted by the Caribbean Development Bank (CDB),  that that was the conclusion emerging from a meeting between Cabinet and Permanent Secretaries and Technical Officers  held last month. That meeting reviewed spending in 2017 and discussions on 2018 work-plans.

In May 2017, Finance Minister Winston Jordan had said that the rate of PSIP implementation had declined to 20 percent at a time when the economy had been in need of a stimulus. 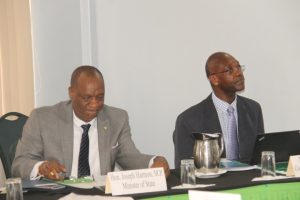 Harmon noted that when the APNU+AFC coalition came to power in May 2015, there had been issues of transparency, poor quality of work and slothful implementation which government had to address.

Director of the Finance Ministry’s Project Cycle Management  Division, Tarachand Balgobin said last month he and his colleagues briefed Cabinet about the progress of the 2017 Public Sector Investment Programme (PSIP) and their 2018 strategy for enhanced timely implementation.

He said ‘clinics’ have been already held with the ministries of Public Infrastructure, Education, Agriculture, Public Security, Guyana Defence Force, Regions Five, Six and 10. Additional sessions would be held with the remaining ministries and administrative regions.

Balgobin said the sessions focused on the need to ensure that planning is not seen as an annual event but a rolling three year cycle, aimed at catalyzing development and adding capital stock. “What it must must not is to become a glorified maintenance programme bereft of its investment mandate,” he added.

He said top heads of budget agencies were being told that no project must be implemented without public procurement based on guidelines by the National Procurement and Tender Administration, and a PSIP monitoring instrument to determine if there are deviations from the plan. “We recognised importantly, however, that planning the PSIP and implementing the PSIP can only be effectively done in an environment of strong, vibrant and involved public policy analysis and management and project cycle management,”  the long-serving Finance Ministry official said. 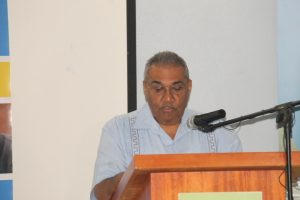 The two-month training programme is expected to focus on, among other areas, public administration, the formulation of public policy, allocation of resources, transparency and effectiveness.

CDB Consultant Coordinator, Reginald Graham said more than 2,300 public officials, including 200 from Guyana, are being trained based on the home-grown needs of individual member-states.

Graham said based on a visit by a CDB team in 2016 and follow-up work, the training programme has been crafted specifically for Guyana. He said already, Online courses have been pursued by the Guyanese participants and plans are in the pipeline to train trainers who would continue to train the relevant public servants.