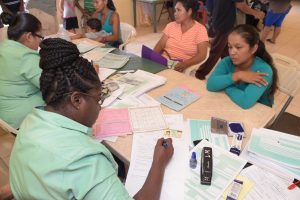 Representatives from the General Registrar’s Office (GRO) help citizens register for their birth certificates during a week-long registration outreach based in Port Kaituma, Barima-Waini (Region One).

Felix also legitimised Allen’s involvement in the outreach activity last week, which was conducted by the General Registrar’s Office (GRO) in Barima-Waini (Region One) to provide registration services for residents there. Minister Felix was at the time responding to allegations, made by the People’s Progressive Party (PPP) and published in today’s edition of the Guyana Times against Mr. Allen.

The Opposition claims that Mr. Allen has compromised the integrity of the GRO’s work by discriminately facilitating registrations and subsequently handing out birth certificates to select civilians. Felix said that the allegations are without truth.

“None of the allegations mentioned has any truthfulness behind it… I Winston Gordon Felix, Minister [of] Citizenship has authorised Mr. Allen since last year to mobilise and assist the GRO staff with moving around… MP Allen has not interfered in the work of the GRO staff. He is of help to them,” Felix was quoted as saying in a Ministry of the Presidency statement.

The Citizenship Minister said that the GRO is obligated to register all citizens and will not display any partiality to any persons being registered over others. “We are ensuring that this is a transparent process. It is done in the open. The public is invited. No one is there to discriminate as to who should be registered and who should not be registered. The registration process takes place in the full glare of the public… We are endeavouring to ensure that the public interest is served by having children registered… That is what we’re after. We’re not after any other ulterior motive. Each child that is born in Guyana must have a birth certificate,” he said.

Deputy Registrar General, Mr. Louis Crawford explained that the GRO’s registration process, in this case, does not allow for the immediate release of birth certificates, further denouncing allegations of Mr. Allen distributing birth certificates. “They do not take birth certificates with them. They receive the applications from the field and [they are] brought to Georgetown where it is processed. That process takes sometimes… some months… Having discovered cross-checks and balances that the person’s birth was not registered, then we will proceed to register that birth and the certificates are returned to the persons in the area. It is by way of mail,” he said.

Mr. Crawford also clarified that Mr. Allen’s responsibilities were focused on logistical and mobilisation support for the outreach. “We seek help in mobilisation… so whenever we go on those outreaches… we capture most of the persons there… Yes, Mr. Allen was used… because of his knowledge of the area and the assistance that he provided the General Registrar to having the staff moving around and in terms of accommodation. In terms of the actual work, he plays no part in it,” he said.

The outreaches, being a function of the GRO, are essential to the Ministry of Citizenship’s ultimate goal to raise Guyana’s 89 percent registration rate to 100 percent. The GRO has held outreaches in all Administrative Regions in Guyana, with Region One being the area of greatest disparity.