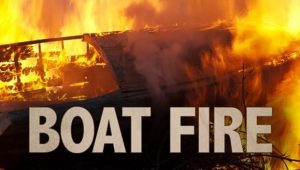 A boat captain and one of four sailors were burnt aboard a vessel which subsequently sank off the Moruca River, North West District, police said.

Those injured are captain of the MV “Three Brothers” Ramesh Maniram, and one of four sailors Ventle Jainarine.

They have been admitted to the Suddie Hospital in stable condition, nursing injuries to their lower limbs as a result of a fire that engulfed the vessel on Monday and which sank subsequently.

The incident occurred about 10 AM  in the vicinity of Moruca River and the names of the other sailors who have rescued the victims, are at the moment unknown, police said.

“Preliminary investigations revealed that the victims were in the vicinity of the vessel’s engine, when a loud explosion was heard and a fire started.

The fire reportedly spread quickly across the vessel and the two victims who were the last to evacuate the vessel, received burns,” the Guyana Police Force said in a statement.

The size and type of vessel were not immediately known.