UPDATE: APNU must say if it wants AFC for local polls; Trotman to write Granger 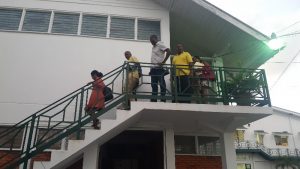 The Alliance For Change (AFC) on Saturday said it would be ready to contest local government elections with A Partnership for National Unity (APNU) but that grouping must first make an offer, a top party official said.

“We are prepared to (coalesce) if the APNU wants us with them and it is for them to say and how,” the official told Demerara Waves Online News ahead of a statement on the outcome of the AFC’s National  Executive meeting.

In a statement issued Saturday night, the AFC said its party leader Raphael Trotman has been mandated to hold talks with APNU about contesting the local government elections.

The APNU has said that its five constituent parties would be contesting the elections as one grouping.

At the 2016 local government elections, the AFC had been disgruntled that the People’s National Congress Reform-dominated APNU had disregarded the spirit of a 2015 general elections pact that had provided for a 40 percent allocation of candidates.

The political agreement known as the Cummingsburg Accord  was signed on February 14, 2015.

That party said Trotman was mandated to write President David Granger outlining the Party’s position “on the way forward and specific issues that are of concern to the AFC.”

The AFC added that its NEC meeting discussed the Cummingsburg Accord critically analyzing its operationalization and the expectation of its members that this still relatively new arrangement will concretize a new era of good governance and development in Guyana.

“The meeting acknowledged that there are areas in the relationship that are working well and others that need to examined, clearly defined and strengthened. An AFC team was identified to discuss these areas with the APNU,” the party said.

The AFC’s General Secretary, Marlon Williams had said if his party decided to contest the local elections in coalition with APNU, renegotiating the accord would have been necessary.

The AFC’s leader had also said that there was a strong body of opinion that his party should contest the local government elections alone.

Both President David Granger and the AFC have in recent days notef that the accord has a life-span until 2020.