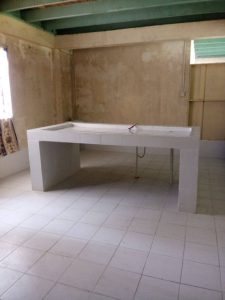 Inside the unauthorised funeral parlour at Savannah Park, New Amsterdam.

The New Amsterdam Municipality and police on Thursday said they were forced to stop all operations at a building located at Savannah Park, New Amsterdam, which they said was being used to store dead bodies.

According to an environmental official, who spoke on condition of anonymity, the investigation came days after the Municipality’s Health Department had received numerous complaints by residents in the area that lately they had neen smelling an extremely foul odour.

A team from the New Amsterdam Town Council, along with Inspector Playter from the Berbice Divisional Headquarters of the Guyana Police Force, turned up at the building on Thursday and demanded documents as proof that permission had been granted to operate a funeral parlour there. However a man,  who identified himself as an office assistant attached to the Central Islamic Organization of Guyana (CIOG), was unable to provide any.

The said structure had housed the Berbice Islamic School.

Demerara Waves Online News understands that the funeral parlour had commenced operation since November 1, 2017 . However, sources said the business was not registered and the Municipality was not notified.

This publication was reliably informed that the Environmental Inspector of New Amsterdam was previously told of the ongoing activity at the building but nothing was done. “We told the head of Health Department long what going on.” One resident in the area said “ at nights a bus mark CIOG would normally come and wait at the gate, then all you will see a man on a bicycle will come and open quickly and they drive in take the body out and gone.”

Meanwhile, the owner was instructed to transfer two bodies, which were in a freezer, to the Arokium Funeral Home and the relatives were summoned to Central Police Station.

The door to the facility is now closed and  an investigation has since been launched.