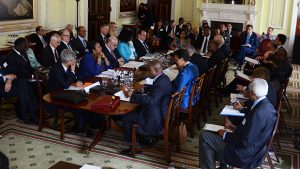 The Commonwealth Ministerial Action Group. Among them is Guyana’s Foreign Minister, Carl Greenidge. Seated behind him is Guyana’s High Commissioner to the United Kingdom, Hamley Case.

The Commonwealth Secretary-General, Patricia Scotland, on Wednesday welcomed the decision of the Secretary-General of the United Nations, Antonio Gutteres, to refer the long-standing border controversy between Guyana and Venezuela to the International Court of Justice (ICJ).

Scotland recalled that at the September 2017 meeting of the Commonwealth Ministerial Group on Guyana, Ministers noted Guyana’s concerns that this longstanding controversy has impacted on the country’s economic development.

The Commonwealth Secretary-General further recalled that at the last Commonwealth Heads of Government Meeting, in Malta in November 2015, the leaders noted that “the Geneva Agreement of 1966 between the Parties provides a range of mechanisms for an expeditious solution to the controversy arising from Venezuela’s contention of invalidity of the 1899 Arbitral Award. The Heads expressed their full support for the United Nations Secretary-General to choose a means of settlement in keeping with the provisions of the Geneva Agreement 1966, to bring the controversy to a definitive end.”

“The Secretary-General reiterated the unequivocal and collective support of Commonwealth member governments for the maintenance and safeguarding of Guyana’s sovereignty and territorial integrity,” according to the statement released by the UK-headquartered Commonwealth.