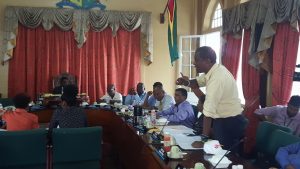 As several grave questions remain unanswered about the City administration’s plans to use a playground in the upscale Bel Air Park to build town houses for top city officials,  a vocal A Partnership for National Unity (APNU) Councillor, Alfred Mentore is warning about the political implications ahead of local government and general elections.

He noted that the playground is owned by the residents of the community who should not be confronted ahead of local government elections due during the last quarter of 2018 and general elections constitutionally due in 2020.

Mentore’s comments come against the backdrop of the likelihood of the Alliance For Change (AFC), which has been already harshly critical of certain controversial projects and decisions, breaking away from APNU and contesting local government elections alone in Georgetown.

Minister of Local Government, Ronald Bulkan has already told the Mayor that City Hall should temporarily prohibit alternative use of playgrounds and opens spaces. 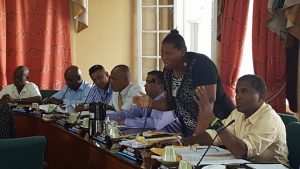 The Councillor, whose constituency includes Bel Air Park, questioned why the Town Clerk was appealing a High Court decision that City Hall cannot use the playground for housing purposes. He also wanted to know why the Town Clerk sought legal advice without the full Council’s authority, how much are the legal fees, the cost for commencing infrastructural works at the ground and whether that money could not have been better spent on workers’ emoluments. “I want to know how much it cost… We know of the limited resources that we have here at the council. We know that we are struggling to pay NIS, we struggling to pay staff but now a job like this happened and nobody knows how much was actually spent,” said Mentore, who said there was no evidence that the works were an emergency.

He acknowledged that Town Clerk, Royston King and appointed administrative officials have a role to play in decision-making but the elected body should have a say on crucial issues such as court action and legal advice. “That advice should have come to us here at Council, be deliberated here by us and let us decide if the fifty thousand dollar damages that we had for the particular matter, we could have accepted it and let us move on now we must be have to spend a million dollars fight a case which we are losing votes on,” he said.

APNU-aligned Councillor, Andria Marks said the monies being spent on legal fees for the playground case could have been used to take legal action against property owners who owe much needed rates and taxes. “We have a lot of people who owe us millions of dollars. We could use this same money and take these people to court and get some of those monies. Don’t spend millions of dollars on attorney to go and fight for land for citizens like me who can go on it and play,” said Marks who has previously called on the Town Clerk to go and has even threatened to move a no-confidence motion against him.

Councillor Akeem Peter, who chaired the statutory meeting in the absence of Mayor Patricia Chase-Green and Deputy Mayor, Lionel Jaikaran, urged the Town Clerk to seek the legal advice and circulate it to all councillors.

The Town Clerk declined to respond to Mentore’s concerns because they are “riddled with inaccuracies” but he assured that the matter was being addressed by the City’s administration and had no problem to bring it to the attention of the full council.

Councillor Peter has mandated Chairperson of the Social Development Committee, Monica Thomas to “lead an investigation into this matter”. In response, Thomas said, “Mr. Chairman, I’m no Sherlock Holmes. My name is Councillor Monica Thomas as far as investigations are concerned but the Committee will meet and discuss the matter.”