Porter stabbed to death over love affair with assailant’s wife 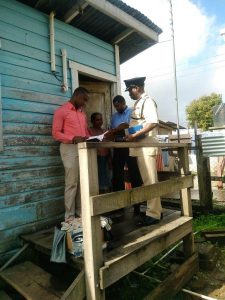 A porter was Monday morning stabbed to death by man who accused him of having a relationship with his wife, the Guyana Police Force said.

Detectives were told that about 10 O’clock Sunday night, Khan and a man, who is currently being sought, were imbibing at the suspect’s Burn Street, Vergenoegen, East Bank Essequibo, home when an argument erupted over an accusation that the victim was having a relationship with the suspect’s wife.

“The argument reportedly escalated into a heated argument and the suspect allegedly stabbed the porter who fled the scene, leaving a trail of blood; the body was discovered about 110 yards from where the incident occurred,” police said.

Investigators have since obtained a statement from the suspect’s wife who was present when the incident occurred.