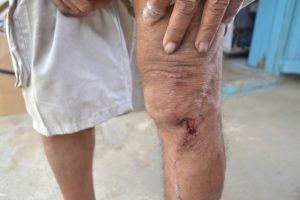 Police have taken into custody a man who was allegedly involved in an early Wednesday morning robbery at Angoy’s Avenue, New Amsterdam, Berbice.

Grocer, Kamalodeen “Tarzan” Mohabir of Angoy’s Avenue said he was at home with his: wife, son and two grandchildren ages 6 and 14,  when they were attacked at about 2 AM by armed and masked bandits.

The 77-year old businessman told Demerara Waves Online News that the bandits entered his house through a window close to the front door.

Mohabir, who occupies the room on the lower flat of the building at Ovalton Dam, Angoy’s Avenue, said that he was awoken by the screams of his wife who was attacked first.

“They broke the lock and went in her room and she screamed for our son,” he said. Mohabir’s wife, Rukomonie Hannamon, 63, was bitten on her legs by one of the intruders.

The man said, realising what was happening, he hurriedly ran upstairs and discovered the man and his son “scuffling with a knife in his hand”. The son Jimmie Mohabir, 43, sustained wounds to his head and feet.

The Mohabirs said they apprehended the bandit and tied him up in the living room before calling the police.  The detainee has since told investigators that his accomplices are Allan and Ryan”

Demerara Waves Online News understands that during that time the two other bandits had already escaped. The family, after the ordeal, discovered that jewellery and over GY$350,000 dollars in cash were missing.