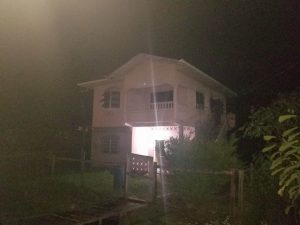 A seven year old girl on Monday evening panicked yet acted swiftly as she tightly wrapped her four year old brother in a sheet letting him down through the front window before using the said window as an exit.

However, she fractured one of her feet as she and her sibling fled the burning two story concrete building.

The two children-Kisson Henry and Kyle Henry- who live with their mother, Timela Henry, at Glasgow New Housing Scheme, East Bank Berbice, were home alone when the fire started around 9:30 Monday night.

The Guyana Fire Service’s’ quick response was able to safe the building.

The loud cries for “help” by the 7 year old child alerted neighbors who ran to their rescue.

One neighbor told Demerara Waves Online News that she was asleep when she received a call from her frantic nieces telling her that a house was on fire. The neighbor said she immediately ran out of her home calling the Guyana Fire Service and the Guyana Police Force to relate what is happening.

“They say aunty a house is on fire, I said you sure, and they say yes aunty I see children hanging from the window, so I called the Fire Service and the Police and they came very quickly.” The woman said.

Demerara Waves Online News understands that the fire might have started from a candle which was lit in the building. “The kids said they were home alone and there was a candle lit and the lil girl said she woke up to smoke; she smell smoke and that is how she wake up,” a neighbor said.

Additionally, this publication was informed that this is not the first time the children were left alone. A neighbour alleged that the mother of the siblings would often times leave the children at home and return hours after.  Another neighbor recalled seeing the children walking late at nights in search of their mother.

Meanwhile, the elder child was rushed to the New Amsterdam Hospital where her fractured foot and minor injuries were treated while the little brother is secured by Police.

Police are also in search of the mother as an investigation by the police and fire fighters continue.