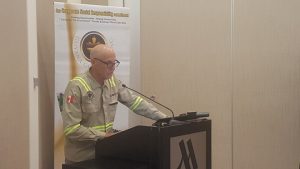 A major Canadian gold mining company on Sunday said it would be willing to submit information to the International Court of Justice (ICJ), as evidence that Venezuela had objected to the establishment of a huge gold mine in the Essequibo region that is the subject of the territorial claim with Guyana.

President and Chief Executive Officer of Guyana Goldfields, Scott Caldwell, acknowledging that “our mine is in the contested area”, said if his company is asked to provide information for the case at the World Court it would be provided. “If required, of course, we would….Right now, our advice was ‘do nothing’ so when we got a notice from the Venezuelan government and we spoke to government’s and legal counsel and it’s a frivolous claim and we don’t respond to frivolous rumours so we did not reply,” he said when asked by Demerara Waves Online News. Guyana Goldfields last year extracted 160,000 ounces of gold, worth almost US$200 million gross,  from its mine in western Guyana near the border with Venezuela.

In 2015, Venezuela had written to Guyana Goldfields warning of legal action if that company had gone ahead with plans to mine for gold at Aurora in the Essequibo Region, saying that it was infringing on the territorial sovereignty of Venezuela and committing unlawful actions which could incur legal consequences.

Based on his discussions with the American and Canadian ambassadors to Guyana and top officials of the United States (US) oil-giant, ExxonMobil, Caldwell said the border controversy between the two neighbouring South American countries poses no risk. “We don’t see it as a risk; really the investors I talk to, it’s discounted,” he said.

Venezuela has since rejected the UN Secretary General’s position, instead saying that a UN-brokered agreement in 1966 only provides for political mediation to resolve the controversy. For its part, Guyana has said that after 51 years, mediation has not worked and it is time to take the matter to the ICJ for judicial settlement because Venezuela continues to threaten much needed investments onshore and offshore Essequibo.

About two years ago, Venezuela had also written a similar letter to ExxonMobil, warning against the exploration and exploitation of oil offshore Guyana.

In 2013, the Venezuelan Navy had intercepted and seized a Malaysia-owned seismic research vessel, Teknik Perdana, that had been conducting oil exploration in an offshore concession awarded by Guyana to the US-headquartered Anadarko Petroleum.