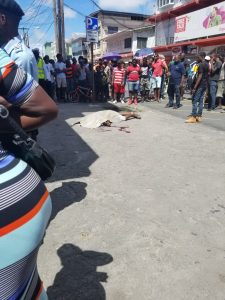 Sources said the gunman demanded that the money-changer hand over a bag with money.

However, the 47-year old Nurse refused and was shot dead. The incident occurred at about 10:10 AM at Avenue of the Republic and America Street.

Police said the “identifiable” assailant was dressed in a red hoodie and brown three-quarter pants.

“Enquiries revealed that the victim was seated on a chair at the corners of America and Avenue of the Republic where he plies his trade when the armed perpetrator approached him from northern direction with the weapon drawn and demanded that he hand over his money.

A resistance was put up and the perpetrator discharged a round hitting him to his head that resulted in his demise.The perpetrator then escaped on foot north on Avenue of the Republic then east into Charlotte Street,” police said.

Police said Nurse was shot once to the left cheek just below the eye. One 9mm spent shell was recovered.

2018-02-04
Denis Chabrol
Previous: Suspected serial bandit commits another robbery while on bail
Next: Underground gold mining to be done in Guyana for the first time