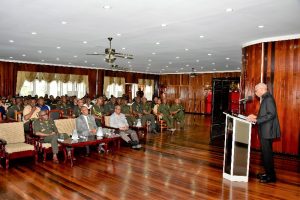 President David Granger on Thursday announced that the Guyana Defence Force (GDF) will undergo a significant restructuring programme in the coming days to allow for a greater level of efficiency in the execution of its mandate and to ensure maximum development within the Force.

Granger, who is also Commander-in-Chief of the Armed Forces, made the announcement  at the opening ceremony of the two-day Annual Officers Conference, which is being held under the theme, “Effective transformation for Total National Defence.” at Base Camp Ayanganna, this morning. Changes will be made to the Engineering Corps, with greater emphasis being placed on public infrastructure, the Agriculture Corps, which will focus on food production for the Force and victims of natural disasters and the Signal Corps, which will be re-established as the main arm for the advancement of information and communications technologies and telecommunications within the Force.

The Commander in Chief said that the GDF, in pursuance of its defence doctrine, is being strengthened as a well-organised, well-commanded, well-trained and well-equipped Force with the core capabilities to keep the Guyanese citizenry safe and secure. However, he noted that in order for it to fulfil its mission, it must be agile, flexible and fully-integrated.  In this regard, President Granger said that the GDF is being reorganised for greater organisational and operational efficiency.

“Several Corps of the Force are being re-formed and re-capitalised. The Agriculture Corps will embark on agro-processing in order to produce foods, which can be preserved and packaged as compact rations for soldiers on long-range patrols and field operations and as emergency supplies to citizens affected by natural disasters such as floods. The Air Corps and Coast Guard will be upgraded to allow for continuous surveillance over our airspace, maritime space and land-space and to support search-and-rescue services to persons in distress. The Engineer Corps will be restructured and re-equipped to enable it to reengage in the development of public infrastructure and assist in disaster relief efforts in other countries affected by natural disasters. The Corps will expand the Force’s capability to generate electrical energy from renewable sources in all military bases and camps,” he said.

The President said that the re-establishment of the National Cadet Corps last week is also in keeping with the restructuring of the Force.  He said that Cadet training centres will be built on a regional basis alongside Militia drill halls. “The Corps will inculcate the five standards of Service embodied in the Force’s Manual of Values and Standards, especially “…responsibility; respect for the law; respect for others; correct conduct; and appropriate social behaviour.” Service in the Corps will expose young Guyanese to the country’s distinctive landscapes and diverse cultures. The Corps will develop their leadership skills and team work and prepare youths for citizenship,” he said.

Additionally, the President said that the reinforcement of the Force’s high command, which started with the restoration of the appointments of Adjutant General, Inspector General, Quartermaster General (QMG)  and Commandant of the Guyana People’s Militia have allowed dedicated superior officers to pay undivided attention to personnel and soldiers’ morale, the improvement of soldiers’ living conditions, a high state of operational readiness and interoperability with fraternal Caribbean defence forces and the mobilisation and training of reserve personnel.

“The Force is being brought up to its authorised strength to allow it to be deployed to any part of the country, in any weather or terrain and at short notice. The ‘reserve force’ – the Guyana People’s Militia – is being re-built in every administrative region. The Militia is an essential arm of the Regional system. Each regional capital town will have its own unit, eventually, to enable to respond more promptly to render assistance to residents in the event of emergencies. The Force is the premier agency charged with responsibility to protect our homeland against the new security threats such as environmental degradation, flooding and drought. The Force is being readied to support the Government’s law-enforcement efforts to combat trafficking in illegal weapons and narcotics and transnational terrorism. The Force will support, also, green initiatives aimed at reducing its carbon footprint,’ he said.

The Head of State said that the changes are in keeping with the Force’s responsibility for the protection of this country’s patrimony. The President noted that it was recognised that the Force faces numerous challenges in safeguarding the national territory including airspace, borders, marine resources and rivers and as such, Government is working to ensure that these are addressed.

“The vast areas, long distances and small aviation and maritime fleets available to our Air Corps and Coast Guard, respectively, limit our ability to effectively control our air and maritime zones. The Essequibo River, our largest river, does not have a single bridge. The Rupununi, our largest region, does not have a single highway. Access to nearly seventy-five percent of our country which is covered with forests is difficult, a situation compounded by inadequate infrastructure – such as aerodromes, bridges, highways and stellings.  Infrastructural development is a top national priority.  The Force’s technical corps must be strengthened to allow it to contribute effectively to national development and to execute its mandate of protecting the territory and preventing transnational crime. National defence is inseparable from national development. Public infrastructure enables public security by guaranteeing safety for our citizens and providing comfort for investors and visitors,” he said.

Meanwhile, President Granger said that the Government, ever mindful of its duty to secure territorial integrity and sovereignty, has been engaged in various, vigorous diplomatic initiatives over the past 32 months. “These efforts have been all aimed at reaching a peaceful resolution to the territorial controversy which arose out of the contention by the Bolivarian Republic of Venezuela that the arbitral award of October 1899, by which Guyana’s borders were formally delimited under international law, was null. Guyana is still engaged in a renewed Good Offices process but we remain confident that the process will eventuate in a juridical settlement of this controversy – one that has stymied the development of our state since Independence.  The Force has embarked on a programme of long-range patrols aimed at re-affirming our national territorial borders – from Punta Playa to the Kutari and from Ankoko to Orealla,” he said.

As the country forges ahead with the pursuit of a ‘green’ agenda, President Granger said that the Force is being improved continuously to give effect to the principle of total national defence. This he said, will see the workload of the Force vastly increasing as it readies itself to respond to emerging security threats, fortify its border presence, increase its contribution to national production and pursue enlightened policies of social cohesion and defence diplomacy.

“The Force, this year, has an opportunity to take decisions to accelerate the transformation process and hasten its plans to continue to rebuild the reserves; re-establish the Cadet Corps; re-tool the technical Corps; reinforce border security and replenish renew the Force’s contribution to economic development,” he said.

Meanwhile, Brigadier Patrick West, in his presentation said that despite the challenges in 2017, the GDF remains resolute in its mandate. As the Force begins its planning for 2018, the Chief of Staff said that the Force will be moving to improve its capabilities and capacity for the continued security of Guyana’s borders and its citizens.