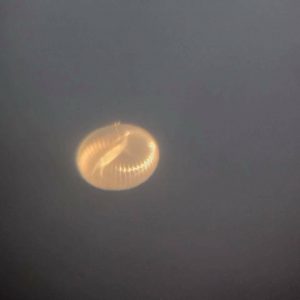 A Project Loon balloon spotted over Trinidad earlier Wednesday. (photo taken by camera phone through a telescope by Mr. Mohamed)

Two high-altitude balloons were flying over Guyana on Wednesday and at least one of them was spotted over northern sections of the South American nation.

He said tracking data showed that one over Timehri and another over the norther region of Guyana. At about 6:00 PM, one was spotted from Kingston, Georgetown.

Field could not say whether Guyana was accessing Internet service from any of the balloons which usually fly at an altitude of about 58,000 feet.

The Civil Aviation Chief said Guyana has been officially aware of the project and had been asked to complete paperwork should an incident occur over this part of the world. He assured that there was no risk involved. “The balloons are pretty harmless and they do not have any engines on them; it is maneuvered strictly by how the wind flows…Because you have winds blowing in different directions, they utilize the flow of the wind at a lower or higher altitude,” he said.

A source in Trinidad also confirmed that one of the balloons was spotted over that island.

Project Loon has been developed by X, formerly Google X, as a research and development initiative to create a network to provide Internet up to 4G-LTE speed.