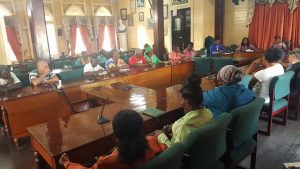 Residents of Georgetown at a consultation on the proposed GY$200 per week garbage collection fee with top City Hall officials on January 18, 2018

Georgetown residents were Thursday warned that those who do not pay the GY$200 per week to collect their garbage would not benefit from the service and would face legal action, even as a top City Hall official called for the banning of plastic bags.

“In terms of you paying and your neighbour is not paying, we have the by-laws coming on stream where we are going to put everybody on board…We will not be collecting garbage from those households if they did not remit that payment to Council and all payments to Council will be done at Council not on the streets or any refuse collector or any revenue collector,” Head of the Solid Waste Management Division, Walter Narine said.

He added that once residents support the initiative and the systems are put in place to collect the fees, those who do not pay would be prosecuted. “We’ll have bylaws to govern every household. Once this is on board, every household will have to pay or they will be fined and summoned to court,” said Narine.

He also made known the Mayor and City Council’s position on plastic bags at the first in a series of public consultations held Thursday afternoon at City Hall.

“The single-use plastic bags should be banned, must be banned,” he said in noting that it takes at least 100 years for each bag to fully disintegrate. Government has already banned styrofoam containers which authorities said  were clogging up the drainage network.

Narine, however, said the City’s administration was yet to decide how and where the fee would be collected to assist the cash-strapped municipal government to collect the estimated 220 tons of garbage daily of which 140 tons are generated by domestic households.

He said already when Cevon’s and Purans stopped collecting garbage, residents had been paying GY$300 to GY$500 to collect their waste.  City Hall officials said even with the planned GY$200 waste collection charge, the municipal government would be subsidizing the cost by as much as 70 percent because the real cost is GY$536 per receptacle, taking into consideration the distance from Georgetown to the landfill site at Haags-Bosch, Eccles, East Bank Demerara.

Narine said Council spends GY$23 million monthly on paying private garbage contractors to collect waste, something he hopes to change with the purchase of more trucks.

Accounts Manager at the City’s Treasury Department, John Douglas said City Hall receives only 15 percent of rates and taxes due to it annually.

While the municipal law provides for one waste receptacle per household, the Solid Waste Management official noted that many have two or more. “That is the problem, right there is the problem,” Narine said.

The Solid Waste Management official, in making out a case for the subsidised charge, laid out some statistics, saying that the since 1994 the city’s population has grown from about 100,000 persons to about 200,000 in 2012 in addition to 10,000 to 15,000 people who traverse the city for business or work.

Also contributing heavily to commercial waste in Georgetown, he said, is the upsurge in the number of fast food franchises and smaller food enterprises compared to the 1970s and 1980s when there was only one fast food enterprise. “We have a great shift from cooking at home to eating on the streets,” he said.

Properties have not been valuated since 1994, while the cost of operations have escalated. Government recently announced that properties across the country would be valuated this year, with the aim of making local authorities financially sustainable.