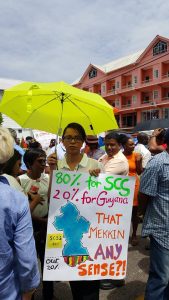 The Movement Against Parking Meters (MAPM) has not ruled out reviving weekly picketing demonstrations following Georgetown’s Mayor and City Councillors voting to amend rather than scrap the contract with Smart City Solutions (SCS).

“I am saying that at some point if this is forced upon us, yes, we will resume protest,” MAPM executive member, Don Singh told Demerara Waves Online News. That entity had held weekly mass one hour picketing demonstrations outside City Hall on Regent Street to pressure that local government body into revoking the contract.

Eventually, nine months ago Cabinet instructed Local Government Minister Ronald Bulkan to suspend the parking meter bylaws to pave the way for the company and City Hall to review the contract and negotiate revisions.

He added that Council’s decision on Wednesday to ratify the decisions by its negotiation committee amounted to a smokescreen for City Hall to fulfill its need for  GY$120 million that have been included in its budget.

“This preordained. They already catered a hundred and twenty million dollars in the budget,” he said. Singh expressed deep concern that Chairman of City Hall’s negotiating committee, Akeem Peter of recusing himself from perusing financial statements and feasibility and leaving that up to the Chairman of the City Council’s Finance Committee, Oscar Clarke “who went on a due diligence trip four days after signing” the agreement.

Singh does not expect the parking meters to be reactivated because there are no bylaws and no new bylaws would have to be approved by the Minister- a process that Singh said could take several months. Town Clerk, Royston King told Demerara Waves Online News that new bylaws would be drafted in sync with the revised agreement to be signed with SCS.

Singh maintained that his organisation wants the agreement to be revoked. “MAPM has said from the get-go that this this thing needs to be revoked, it’s illegal. Why not wait till the courts decide? Why tie yourself up,” he said. At the same time, he said his organisation was not against parking meters as that is one of the recommendations contained  in an Inter-American Development Bank study on road transportation in Guyana.

Contrary to criticisms, Clarke told the Council meeting that the contract between City Hall and SCS is legal and there was no need for SCS to release its feasibility study to the public.

By a majority vote of 15-4 and two abstentions, City Councillors adopted the recommendations of the negotiation committee. Those recommendations include a reduction of parking meter rates from GY$570 per hour to GY$150 per hour and GY$800 for eight hours. Schools and places of worship will have to seek exemptions from SCS.

SCS can sell vehicles at public auction 60 days after three violations and 14 days notice. The company will not have a monopoly on garage parking.

Peter said City Hall’s team agreed to stick with 20-80 gross revenue split, instead of SCS’ 50-50 net expenses split, fearing that the company could inflate its expenses or add on new ones. He said under the 20-80 formula, the company would in reality get 30 percent after expenses and the City 20 percent.

The two sides agreed to set up a joint oversight committee that will meet twice yearly for the next three years.

Disputes will be settled in keeping with Guyana’s laws and arbitration will be done in Miami, Florida.

Councillors aligned to the Alliance For Change and the People’s Progressive Party Civic are opposed to the parking meter contract with SCS.